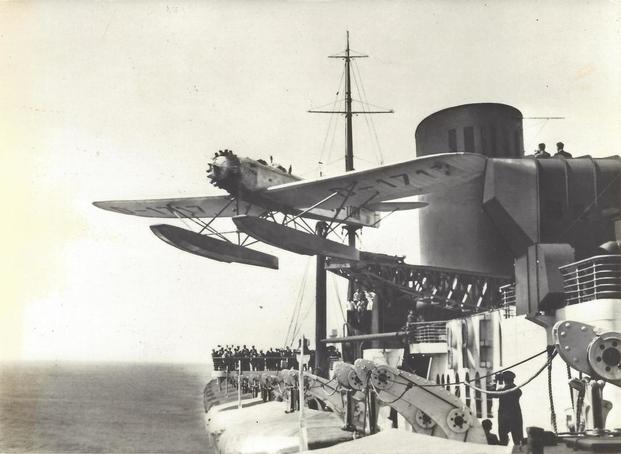 AVIATION 11035/1
​In the late 1920s the SS Bremen's mail plane was catapulted into the air en route to New York, gwtting mail across the North Atlantic a day or two faster. This photo from the airmail service's early days marks the 75th anniversary of a pioneered in Frankfurt am Main in 1912.
Photo: DaD/Lufthansa Photo
GERMAN FEATURES - 26 June 1987 (05) ​
Intended for, but not flown on, the Fifth South American Flight
(5-8 August 1934). Flew by Catapult Mail instead.
A cover addressed to Albert Thasler, Pernambuco, Brazil posted in Kuwait.

Perhaps wrongly described by Cherrystone. "1934 (30 July) registered cover addressed to Pernambuco, intended for the 4th SAF to Brazil, sent instead by airmail, label "By Airship Graf Zeppelin" crossed-out, with arrival pmk.” I think the cover was intended for the 5th SAF departing Friedrichshafen on 5 August 1934, but arrived late.

Franked with 12 as Indian Airmail stamps overprinted KUWAIT, and cancelled KUWAIT, REG, 30 JUL 34, and also with KUWAIT R 45registration label, and light blue etiquette BY AIRSHIP Graf Zeppelin, which is cancelled out by pen. Also on front another blue etiquette with a white border BY AIR MAIL, PAR AVION. A hand written endorsement By Airmail to London! and Airship Germany (indistinguishable word) with all but By Airmail struck out by pen. Also handwritten on the front is! Printed matter!.

On the reverse we see three round postal marks KUWAIT, REG, 30 JUL 34, then we have an indistinguishable mark dated 8.8.34, and finally an arrival mark at PERMANBUCO 20 VIII 34.

From 21 July 1934 through 3 November 1934 a weekly service was operated from Germany to South America. This alternated between a bi-weekly Zeppelin service and a bi-weekly Katapult flight service.

So, the cover missed the 5th SAF service which left on 5 August. Instead it would have flown on the DLH Katapult Air-Mail service which left on 11 August 1934 and used the Dornier-Wal flying boat the catapult ship Westfalen. The Westfalen and the flying boat waited at Bathurst off Gambia for the incoming mail, and then sailed in the direction of Natal. After 36 hours, the flying boat was catapulted in the direction of Brazil, and the Westfalen moved to a pre-determined position nearby to await the return flight to take the flying boat and the mail back to Europe.
​
Provenance: Cherrystone Auctions Sale 1216, November 2016, lot #742.
Katapult Mail
Returned to Sender I USA-INDIA-USA
Via Germany-England (Southampton) Flight K-186
23 June 1934
3 Month's Story
Only Know to India 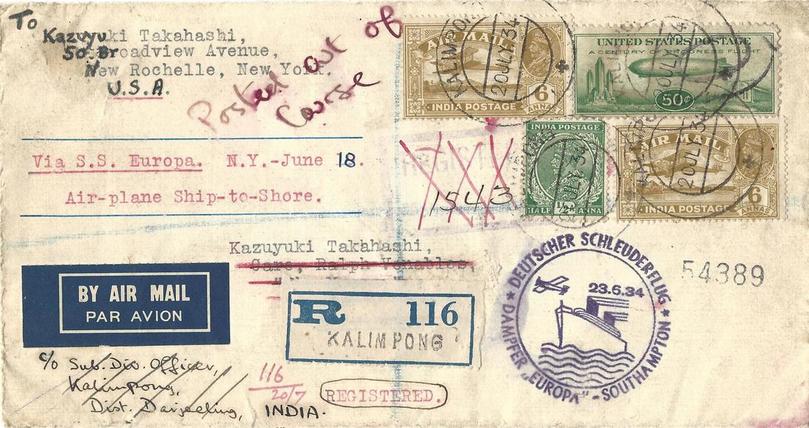 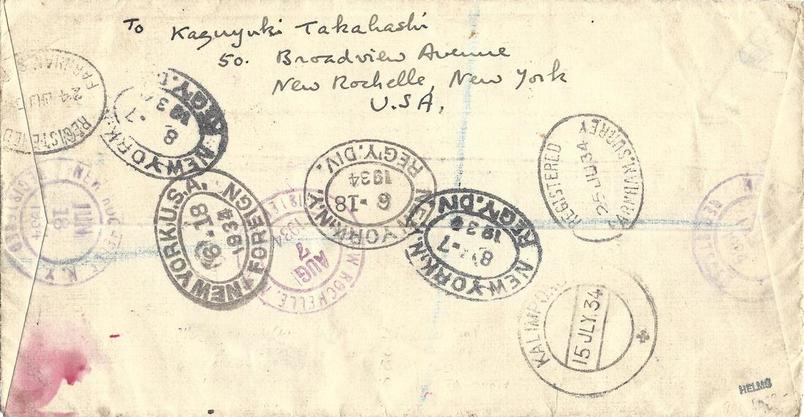 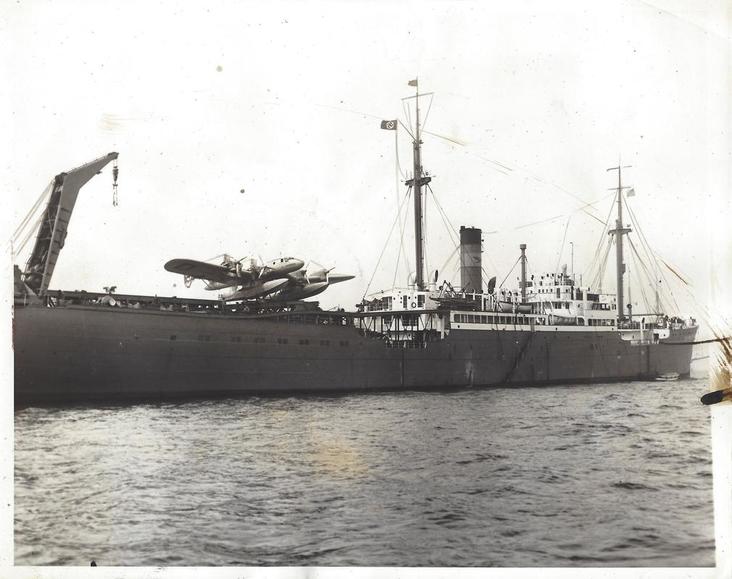 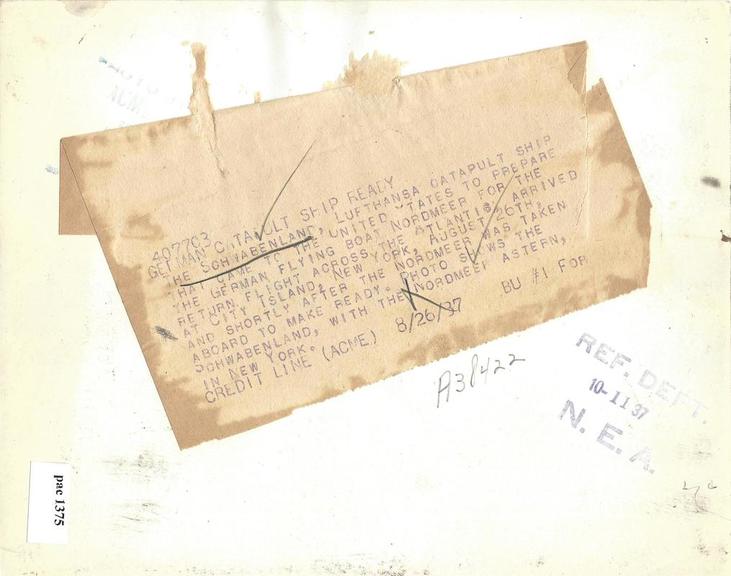 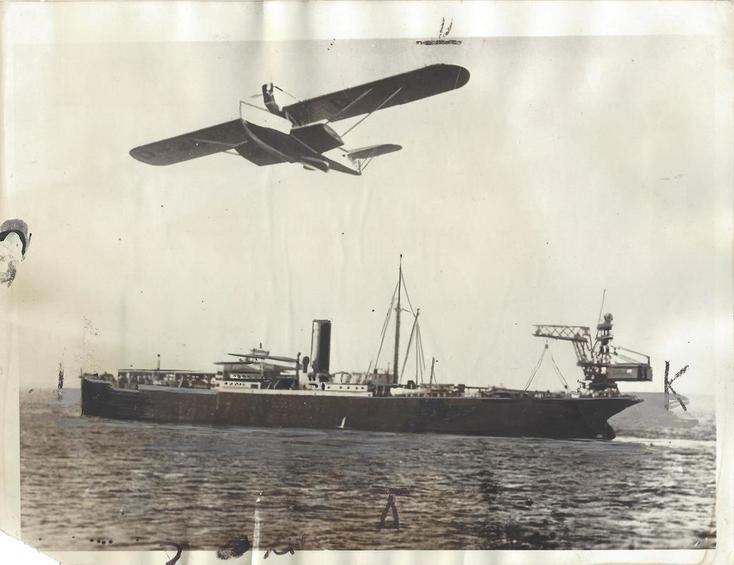 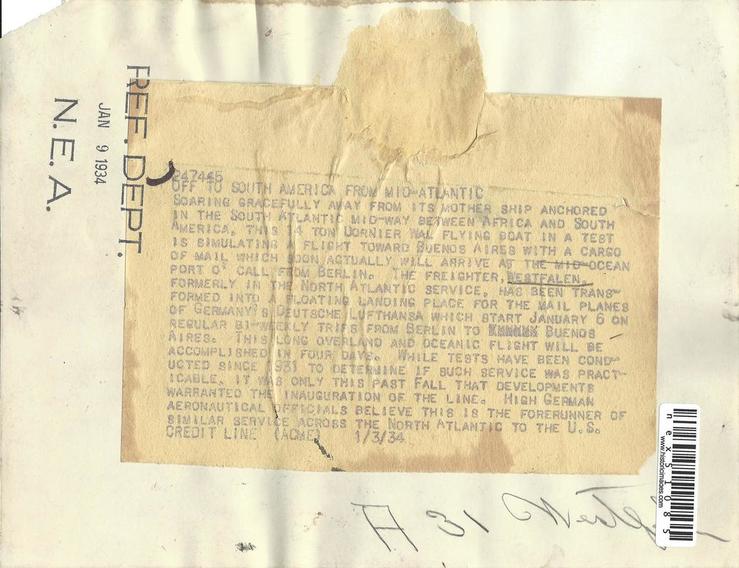 Catapult Mail service to South America by DLHFlight # L 119
From Stuttgart to Pernambuco.
Cover mailed at Aden
31 October - 2 November 1935
Catapult Mail
Calcutta to Pernambuco by air
1-2 April 1937 on DLH
Cover with embossed crown on verso and franked with 48a 9p value addressed to Permanbuco. Cancelled CALCUTTA G.P.O. / 22 MAR 37 / 6.15 P.M. and arrival mark on reverse CORREIO AERO / PERNAMBUCO / 8.IV.37. Also on the front is the DLH staging cachet in red with the character ‘b’ on the right side indicating it was applied at Frankfurt/Main.

The cover left Calcutta by IW 532 at 05.30 on Tuesday, 23 March and arrived Southampton at 15.03 on Sunday, 28 March, travelling on the Artemis upto Karachi and then on the Helena and then the Capella. It continued the journey by rail to London arriving at 18.11 the same evening. Then by air to Frankfurt and connected by the DLH service L 231 departing Frankfurt at 04.27 on Thursday, 1 April and arriving Natal at 23.46 on Friday, 2 April. This was first on the Mistral and then by Seaplane (Catapult flight). It may be noted that theoretically the cover may have left Calcutta by IW 533 departing at 05.30 on Friday, 26 March and reaching London at 20.15 on Wednesday, 31 March, but this is less likely as there would have been a really tight connection to Frankfurt, but it is possible. (IAL timings are from the schedule)

Another interesting aspect to note is that the visible franking on the cover is 3R and 9p (48a and 9p). The airmail rate to Brazil was 46a + ordinary letter rate of 3a 6p. This means the letter was understamped by 9p. Closer examination of the cover reveals that there is a faint gumming mark visible to the left of the 9p stamp of about the same size, but no part of a cancellation mark. It is possible that there was an additional 9p value stamp affixed that escaped cancellation as Calcutta G.P.O. tool great care to obliterate the 1R and 2R values. This 9p stamp either fell off, or was carefully removed by someone for later use.
Catapult Mail by Lufthansa to Brazil
And onwards to Uruguay by Condor
6 - 10 May 1937
1937 cover from Willowbund:
​
April 28, Wednesday, dispatch at Willowbund, surface transportation (railway) to Madras
April 29, Thursday, 2pm, Tata Sons (Tata Air Service) departure from Madras
April 29, Thursday, 5 pm, Tata Sons (Tata Air Service) arrival at Hyderabad
April 30, Friday, 6.30 am Tata Sons (Tata Air Service) departure Hyderabad, flight went via Bombay and Ahmedabad to Karachi
April 30, Friday, 7 pm, Tata Sons (Tata Air Service) arrival at Karachi
May 1, Saturday, 9 am, Imperial Airways departure Karachi for Europe. This was the flight coming from Brisbane, Singapore and Calcutta. This flight went via Iraq, Egypt to Europe (Athens, Brindisi, Rome, Marseille, Southampton to London)
May 5, Wednesday, 12.17 pm, Imperial Airways arrival at Marseille
May 6, Thursday, 9 am, Lufthansa stop at Marseille, flight was coming from Frankfurt and continued via Seville and Las Palmas to Bathurst, then Atlantic crossing to Natal, Brazil
May 7, Friday, 7 pm, Lufthansa arrival at Natal, Condor took over the mail, flight went via Bahia, and Rio southwards via Buenos Aires to Santiago
May 9, Sunday, about 7 pm, Condor arrival at Montevideo
May 10, Monday, Montevideo arrival postmark, cover was delivered to the addressee

Despite the Zeppelin flight cachet, but since the crash of the Hindenberg on 6 May, 1937, all commecial zeppelin flights were suspended and mail to South America.

This is the regular routing which most of the mail from Far to East South America took. The much rarer route is Far East - Marsielle with Deutsche Lufthansa connection at Marseille. (Comments: Dieter Leder)
Return to Zeppelin Home Page
Important Copyright Notice: The information and images contained in this web-site cannot be copied or used for any purpose without permission. Copyright of some items listed here belong to other respective owners, and some belong to us, while some are from the public domain. Hence, in order to avoid future complications, please contact us for any such requirement, by clicking this link, and we will respond appropriately. Any violation of this policy, may lead to prosecution of a Civil or Criminal nature, or both, solely at the infringers risk and cost.