The Return flight left London on the morning of 12 June, landing in Bombay on 13 June after halting at Geneva and Cairo. Return mail on this flight is not very common, and only a limited number are thought to exist. Each of the three points of origin have an interesting story, which I will recount in this page. Additionally, no mail originating from any other location has been seen.
Return Mail from London
Officially, no mail was permitted to be carried on the return flight, and there are estimates from various experts that somehow between 25-50 letters made it on the flight. My own guess is that the number was a little larger, maybe 100-200 covers. Most of these covers were prepared by Jal Cooper.

Air-India International souvenir cover printed specially for the return flight (London – Geneva – Cairo – Bombay) in mint condition. An unused and blank cover is being recorded for the first time.
Air-India International
First return Flight from London to Bombay
12 June 1948.
Rare Air-India International Souvenir cover printed for the return flight London - Bombay. Franked with KG VI 1 shilling value and cancelled and post marked LONDON S.W.I., D, 6.15 PM, 10 JNE, 1948. Boxed rectangular arrival mark on the reverse BOMBAY-25, 14 JUN 1948. Cover addressed to M.M.D'Souza, Radio Officer, Air-India Limited, Bombay Airport.
Very rare cover, and only a handful are known to exist.
Above: Air-India International souvenir cover with the words London - Bombay Inaugural Flight printed on it. Generally when one sees such a printed cover, it is normal to expect a large quantity to be prepared, and used. However, such examples are rarely seen for this flight, and collectors still imagine there is a hoard somewhere that will surface one day. The One Shilling postage stamp is cancelled with a comet cancellation, LONDON S.W.1, G, 6 PM, 10 JNE 1948.

There is no clear evidence of any return mail from Cairo on this flight. It just does not seem to exist. I have come across this one registered cover with a 12 June 1948 mark, and speculate whether there is any possibility this made it on the return flight. One of the goals of this web-site is to get feedback from collectors and professionals around items like these, and increase our knowledge pool. So, all visitors are requested to send me feedback by filling in the Contact Us page.
Above: Here is a Private issue registered mail cover that was flown from Bombay to Cairo on the first outward flight, and has an arrival stamp at Cairo dated 9 Jun 18. There is another stamp which reads CAIRO DELIVERY, FOREIGN, R, 12 JUN 48, 10.00 A. One can speculate that this was returned to the sender on the return first flight, but there is no arrival stamp in Bombay to establish this.

There is another example of the Air-India souvenir cover with similar markings. You can see it in my blog of August 2016. 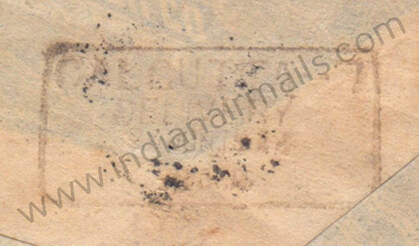 NIC
Here is a ‘Round Trip Cover’ that flew Bombay-Cairo on the 8 June First Flight, and returned Cairo-Bombay on the Second flight which would have left Cairo on 20 June (?). The faint CALCUTTA 7 / DELIVERY / 23 JUNE 1948 mark on the reverse clearly establishes this, and is the first recorded example of a cover on the second return flight from Cairo. The search for a cover from Cairo to Bombay on the first return flight continues.
Return to Aerophilately Home Page
Important Copyright Notice: The information and images contained in this web-site cannot be copied or used for any purpose without permission. Copyright of some items listed here belong to other respective owners, and some belong to us, while some are from the public domain. Hence, in order to avoid future complications, please contact us for any such requirement, by clicking this link, and we will respond appropriately. Any violation of this policy, may lead to prosecution of a Civil or Criminal nature, or both, solely at the infringers risk and cost.