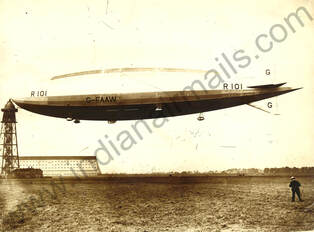 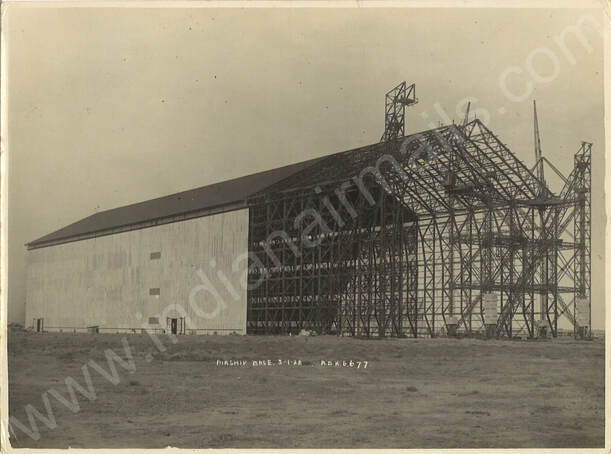 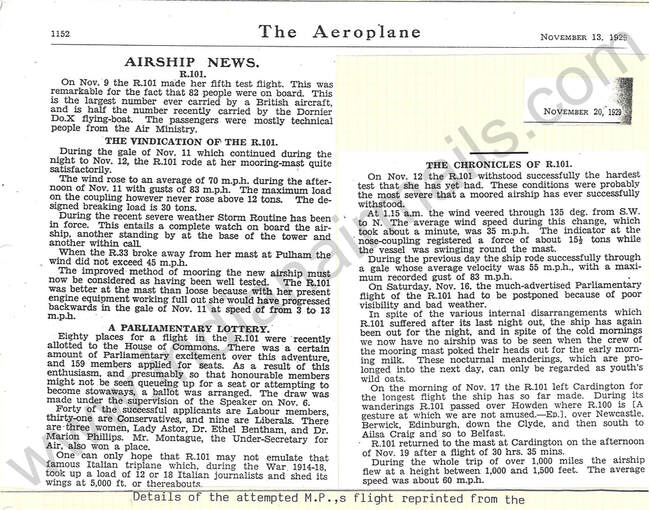 Details of the attempted MP’s, flight reprinted from the “Aeroplane”
Airship R.101 Postcard
Original postcard of R.101 on the mast at Cardington before 30th November 1929 when she was taken into the hanger for lengthening. 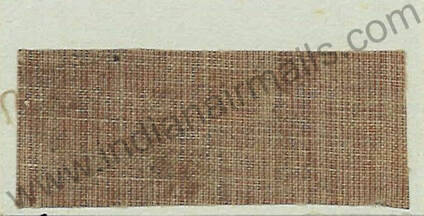 A piece of the fabric stripped from the airship when she was lighthened.
Postcard of Airship leaving her mast on one of the seven test flights she completed before 30th November 1929.
Times Newspaper article about M.P.s visit to the R.101 recording that mail was posted on board. 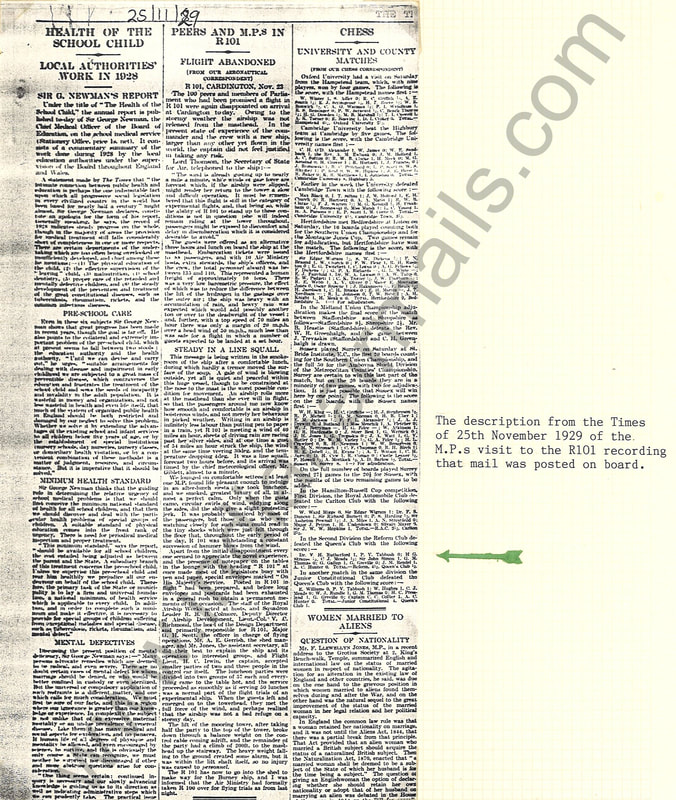 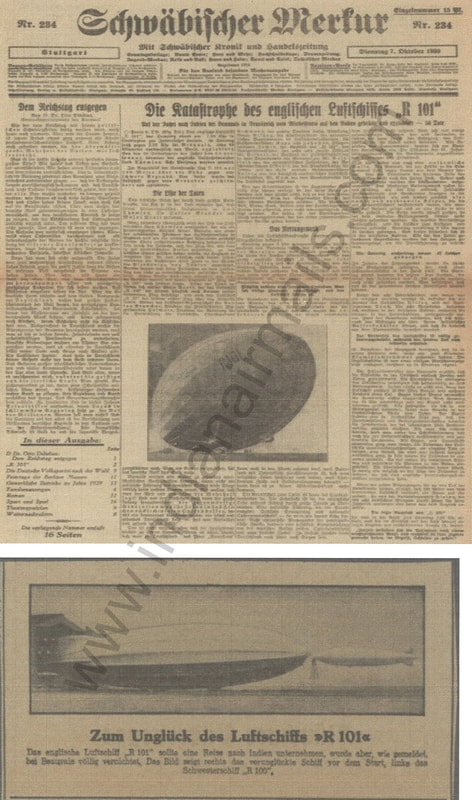 The Royal Airship Base, Karachi
Preparations for arrival of the R-101 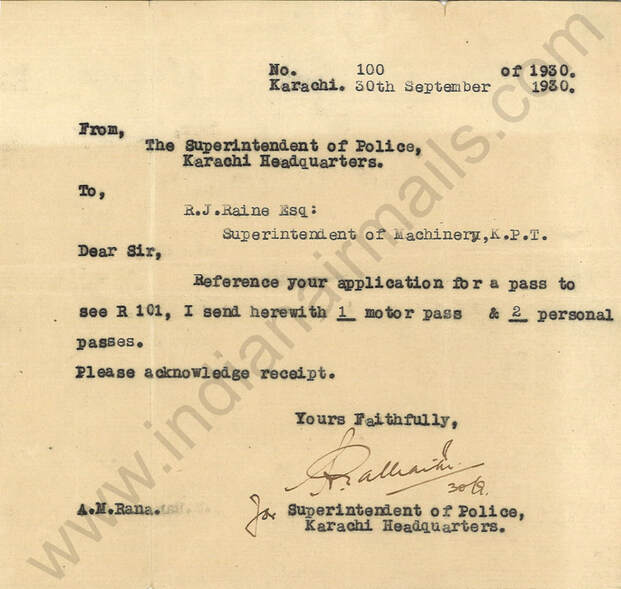 Covering letter for passes
Mail intended for the R-101 First Flight
Cardington – Karachi. 3 October 1930
A cover despatched from London to India by registered air mail marked "via R.101" Despite previous plans on ordinary mail was allowed to be carried by the G.P.O. Backstamped on arrival after delivery by the aeroplane service.
Markings:
Cancellation "Grosvenor St., W.1. 3 Oct.30"
Blue "By Air Mail" label
Written "Air Mail via R.101" "Registered"
on reverse arrival cancellation "Kohat Reg. 14 Oct. 30"
​hand stamp "Registered 3 Oct. 30 WDOWI"
Airship R.101 Memorial Card
The R-101 First Flight
Cardington – Karachi. 3 October 1930
Though the R-101 was not intended to carry mail to India on the disastrous flight, 12 lbs of mail was included in the freight manifest. This cover almost certainly was not carried though it was posted the day before the flight.
Marked “By Airship R. 101” addressed to India.  Re-franked and re-addressed to Bagdad with 5a Indian adhesives, comprising 3a Air Fee from Karachi + 2a Additional Air Fee for beyond. No additional surface mail rate paid as that was covered in the GB postage.
Reverse - India air mail franking cancelled at Peshawar on 9 NOV. 30.
England - India
HMAS R.101
HM Airship R.101, G-FAAW left Cardington for India on Saturday, 4th October 1930. Circling Bedford after leaving the ground, course was set for the London at 1854 hours. Passing over Hitchin, London was reached at 2100 hours and the intension to set course for Paris, Tours. Toulouse and Narbonne was signalled. The English coast was crossed at Pett Level near Hastings and in worsening weather, the airship headed out across the Channel for the coast of France.
At 0145 hours on Sunday, 5th October, the airship's position was calculated about a kilometere north of the landing ground at Beauvais. This was confirmed by Le Bourget at 0151 hours and acknowledged by the R.101. At 0207 hours, the R.101 crashed into the woods near Beauvais.
The R-101 Crash at Beauvais, France
5th October, 1930
The wreckage of the R-101. Beauvais, 5th October 1930.
Bodies of the victims were buried in a common grave at Cardington on 11th October 1930 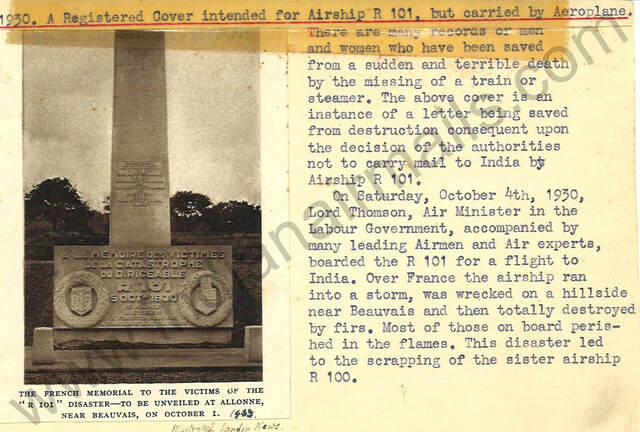 Memorial to the victims of the R-101 disaster unveiled at Allonne, near Beauvais, on 1st October 1933.

In Memorium card for the dead of the Airship R.101 which crashed at Beauvais including Load Thomas, Major G.H. Scott, Wing Commander R.B.B. Colmore, Lt. Col. V.C. Richmond the and airship designer and 44 others, 6 more survived. All the bodies were buried at Cardington.
An original programme for the funeral service and procession October 5th 1930 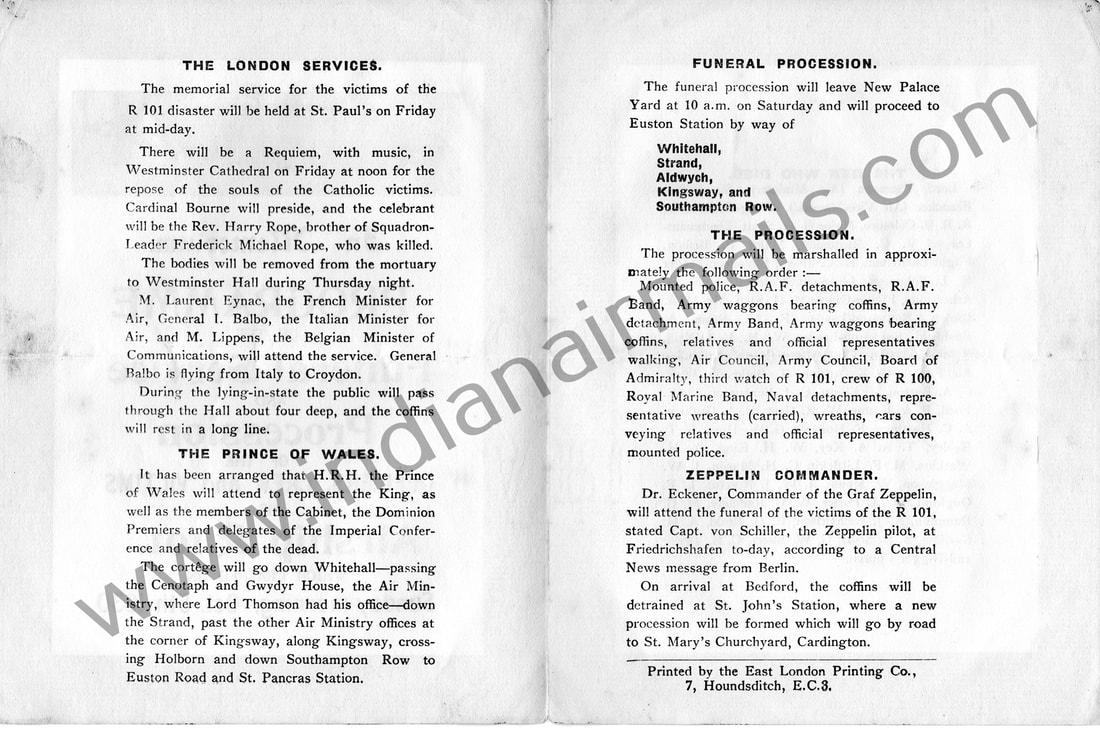 Mail prepared for the return flight of the R-101 Karachi
Cover sent from Karachi Airship Base prepared for the arrival of the R 101, to the Chief Aerodrome Officer London Airport, Croydon on OHMS stationery with Indian air mail stamp. Cover sent 3 years after the destruction of Airship R 101. 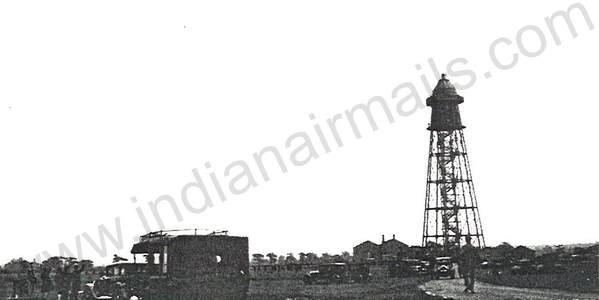 The Airship mast at Karachi never received an airship and was eventually demolished.
Cover addressed to the Royal Airship Base, Karachi.
Even though the airship programme was abandoned in 1930 following the crash of the R-101 airship, the name of the base in Karachi survived, and we have here a cover addressed to it, and also much travelled with several interesting postal marks on the reverse.

Meter advertising panel is also interesting, and so is the 1 anna franking.
1995 Cardington, England
1930
Airship R.100 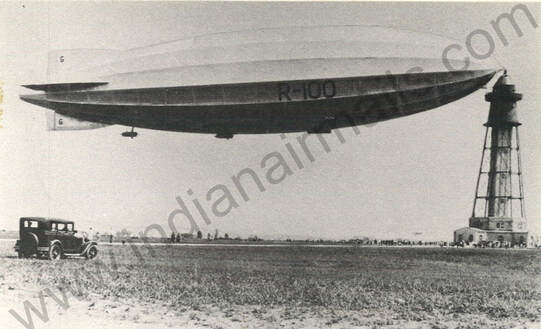 Some post cards were specially cacheted at St. Hubert Aerodrome, Montreal on the outward trip and a pictorial cachet of the ship at the mast at Montreal was applied to post cards on the return trip. The cachet is similar to the photograph above.
The ship achieved a double crossing of the Atlantic like the R34, but this time no mail was supposed to be carried but some mail was taken by the crew on the return trip. The cover commemorates Sir Barnes Wallis who designed the ship.
Important Copyright Notice: The information and images contained in this web-site cannot be copied or used for any purpose without permission. Copyright of some items listed here belong to other respective owners, and some belong to us, while some are from the public domain. Hence, in order to avoid future complications, please contact us for any such requirement, by clicking this link, and we will respond appropriately. Any violation of this policy, may lead to prosecution of a Civil or Criminal nature, or both, solely at the infringers risk and cost.