One mail bag was found on 8 November 1950. Manuscript: From Aircraft Crash in Alps received in London 17 November 1950.
More mail bags were found in the following Spring after the snows had melted. Typed label: Salvaged April 1951 from the / Air Liner “Malabar-Princess”, which / crashed in the Alps, November 1950.
​
112 letters were subsequently found on 8 June 1978.
A further mail bag with 75 letters and cards, all addressed to the United States, was found by a Scottish student, Freya Cowan, about 8,000 feet below the site of the crash 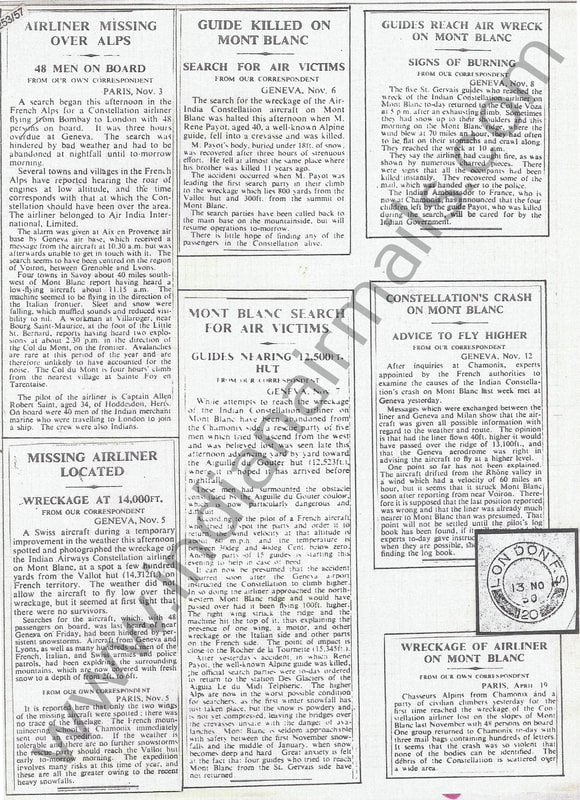 Source: The Indian Express, Saturday 24 August, 2019.
50-80; (Nierinch 501103h): Only 1 mailbag was recovered in the first attempt in November 1950. Subsequent recoveries started only in April 1951 after the snows had melted. This cover was part of the first recovery, and the envelope was posted in Cairo on 31st October 1950. There is the hand written remark, From aircraft crash in Alps (Nierinck 501103h). Also on the reverse of the cover is the arrival mark LONDON 13 NO 50, thereby establishing this cover was in first and only mail bag recovered in November 1950. 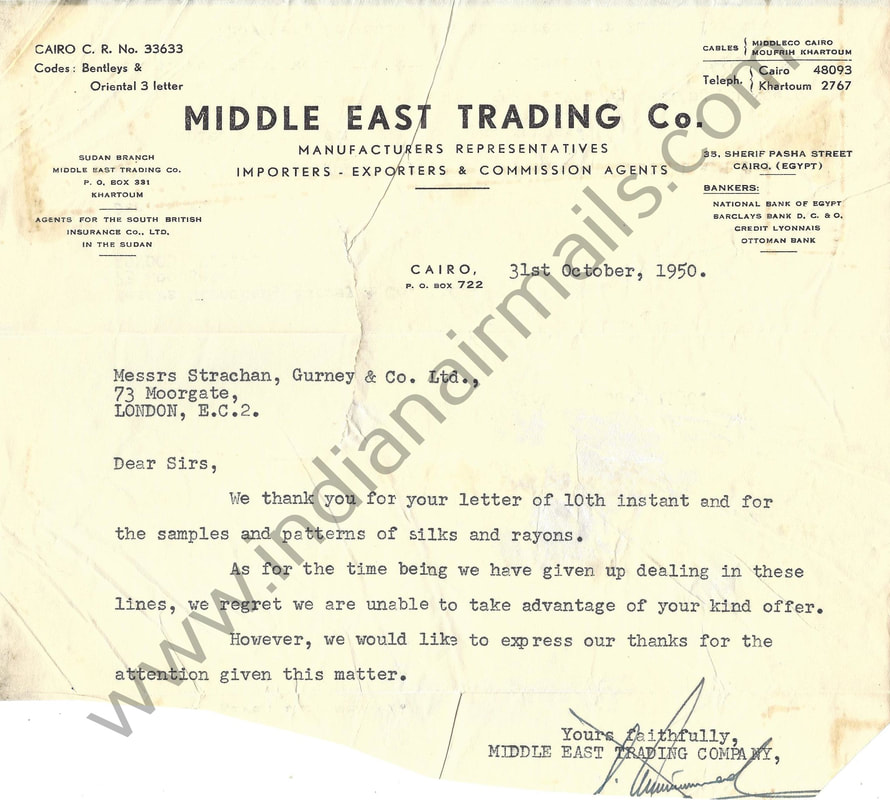 50-80: (Nierinck 50113h): Original letter that was in the cover displayed above, dated 31st October 1950 at Cairo, addressed to London in response to a trade enquiry.
Air-India International, Crash of the MALABAR PRINCESS
3rd November 1950
1st Recovery cover
ISC 50-80 (Nierinck 501103h): Only one mailbag was found in the first recovery containing mail from Cairo. This cloth backed cover is one of the few with stamps intact and has the hand-written endorsement found on mail to Britain, ‘From aircraft crash in Alps’
50-80: (Nierick 501103b): Reverse of the cover salvaged from crash of the Malabar Princess showing label affixed in London and arrival mark LONDON F.S. 30 AP 51. This mail was salvaged in April 1951.
50-80 (Nierinck 50113, label B): Cover addressed to Tata Limited, London from India, franked with 4x3a. postage stamps, and tied with Bombay RMS, 2 Nov 50 cancellation mark.

Reverse of the cover salvaged from crash of the Malabar Princess showing label affixed in London Salvaged April 51, from Air Liner "Malabar Princess" which crashed in the Apls, November 1950.
On the morning of 3rd November 1950, AIr-India Flight 245, the Malabar Princess, was on its Bombay - Cairo - Geneva - London route, when it crashed into Mont Blanc. All 40 passengers and 8 crew members were killed. The cause of the crash is unclear and attributed to turbulent weather. Mail from the crash was mainly  recovered in the spring of 1951.

Registered Official cover dated 31st October 1950 from New Delhi Defence Head Quarters (DHQ) to London. A signed and sealed cover from the Indian Air Force Accounts Office to the High Commissioner of India. Bearing Service stamps of 1 rupee 2 annas, paying the correct prevailing registered airmail rate (14 annas for airmail and 4 annas for registration). Part of the April 1951 recovery and bearing the special label applied on crash mail. Received in London on 30th April 1951, that is, 181 days after it was sent.
The only recorded Official mail recovered from this crash.
Air-India International Malabar Princess
Crashed into Mont Blanc
3 November 1950
ISC 50-80 (Nierinck 501103b): Air Mail envelope franked 1 Re and 8 as (correct combined rate for second weight stage) and cancelled BOMBAY R.M.S., 1 NOV 50, 6 PM., and addressed to London. Bears the second recovery paper label that was applied to mail sent to the UK in April, and on the verso, the LONDON, F.S., 30 AP 51 circular datestamp. 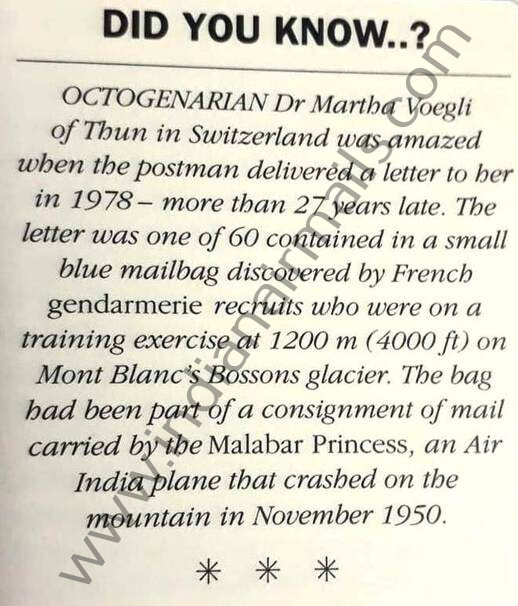 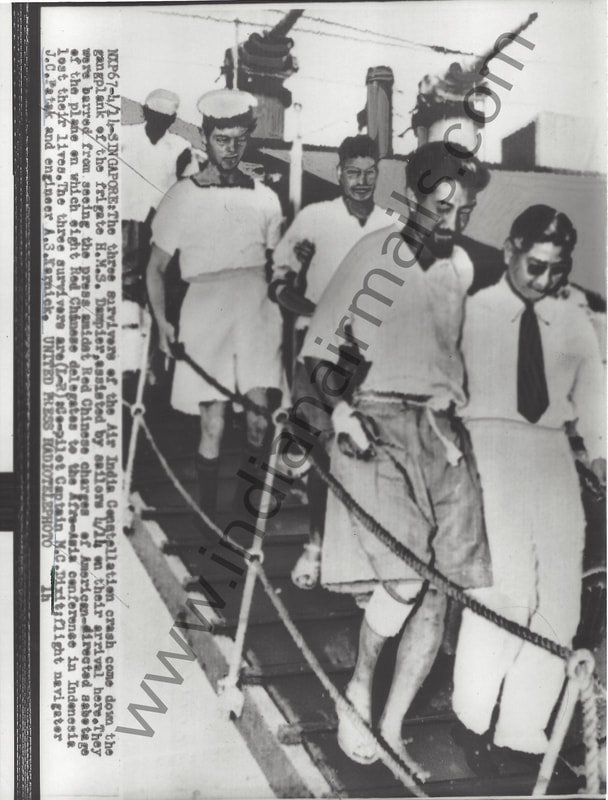 The three survivors of the Air-India Constellation crash come down the gangplank of the frigate H.M.S. Dampier, assisted by sailors 4/14 on their arrival here. They were barred from seeing the press amidst Red Chinese charges of American - directed sabotage of the plane on which eight Red Chinese delegates to the free-Asia conference in Indonesia lost their lives. The three Survivors are (left to right: Co-Pilot M.C. Dixit: flight navigator J.C. Pathak and engineer A.S. Karnick.
59-50
Air-India Rani of Agra
Bombay, 19 July 1959
Air-India Super Constellation VT-DIN Rani of Agra caught fire whilst landing at Bombay from Tokyo.
​The crew and 35 passengers all escaped unhurt.
59-50: Letter from Medan, Indonesia to London, England. 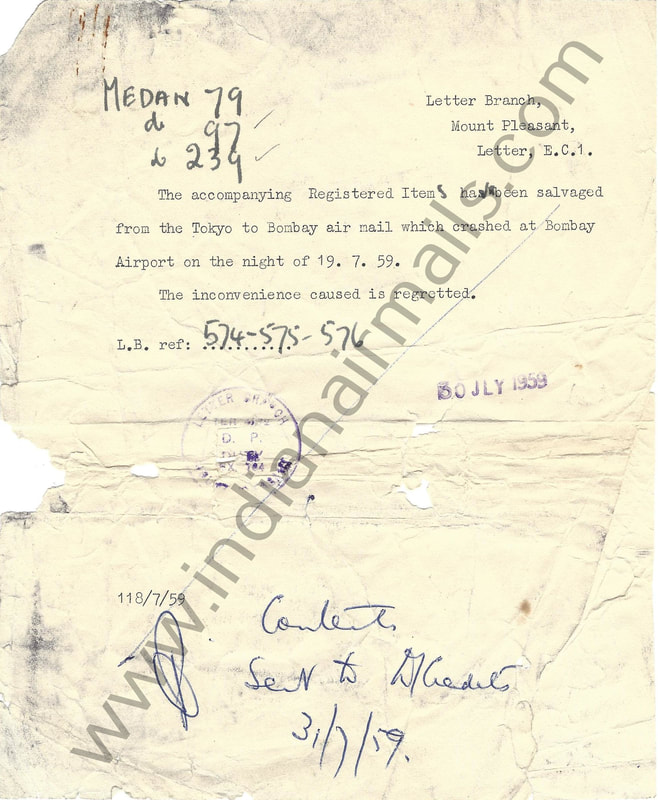 Air-India Super Constellation VT-DIN Rani of Agra cought fire whilst landing at Bombay from Tokyo, The crew and 35 passengers all escaped unhurt. See reference to Medan 97 and 239, which are the two covers shown here.
59-50: Letter from Medan, Indonesia to London, England.
66-10: Air-India Kanchenjunga
24 January 1966
Air-India Boeing 707 VT-DMN Kanchenjunga, flying from Bombay to New York under the command of Captain J T D’Souza, crashed into a rock shoulder called “Rocher de la Tournette” on Mont Blanc at 15,400 feet in thick cloud while on approach to land at Geneva.

Wreckage was strewn over a wide area.  Initially only 3 bodies were found and a limited amount of mail.  On 26 August 1989, the fuselage and 114 bodies were found in Miage Glacier which, because of hot summers, had carried the remains down to 7,800 feet.
​​
Also on board were 15 monkeys en route to a European Zoo.  They survived the crash but froze to death in the snow. 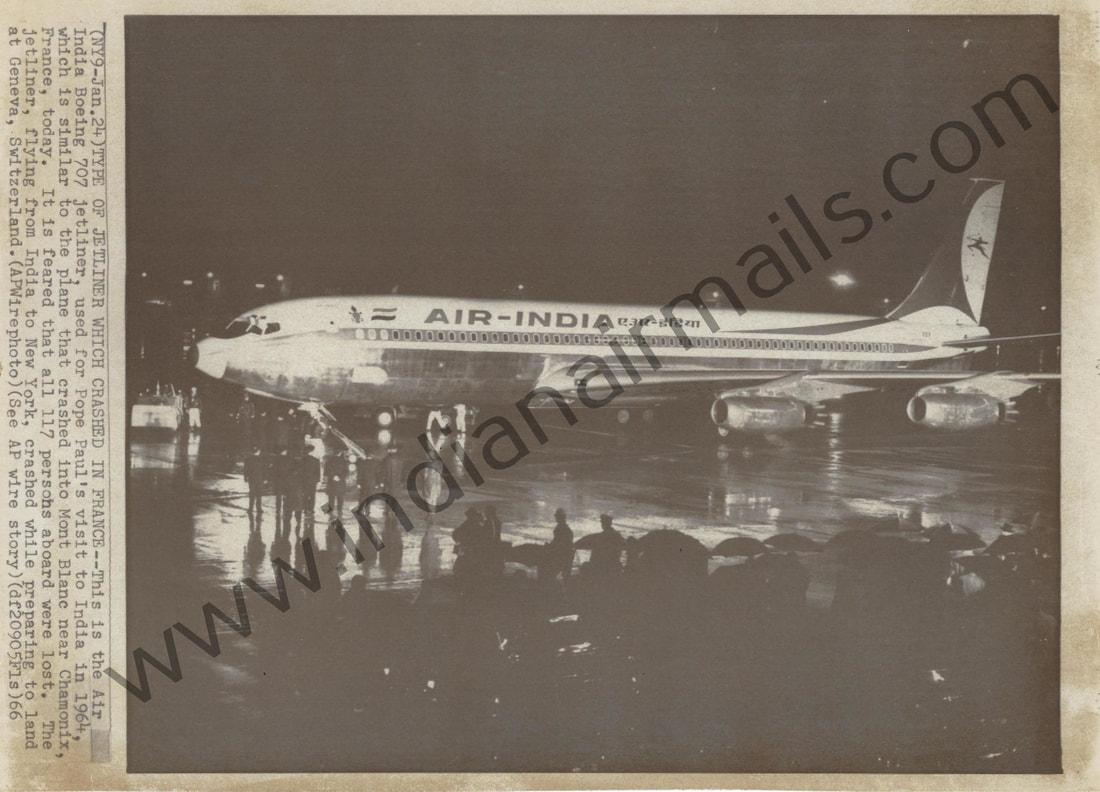 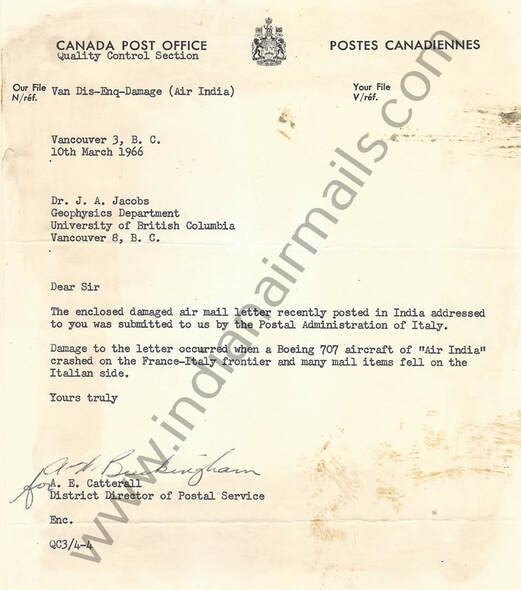 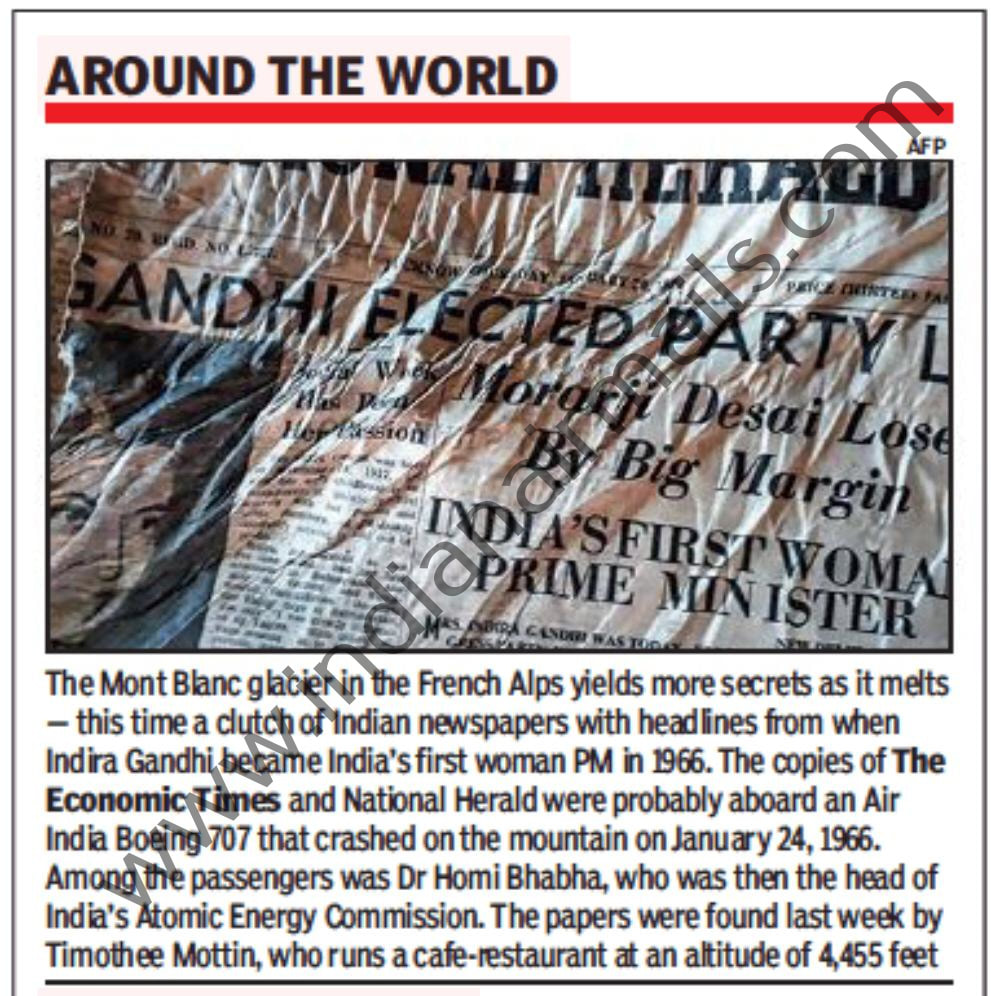 Source: Indian Express, New Delhi, Tuesday, 14th July 2020
Click here to see more AI Kanchenjunga Crash findings
82-50
Air-India Annapurna
22 June 1982
Air-India Boeing 707 Annapurna VT-DJJ, en route from Singapore to London, overshot the runway whilst landing at Bombay (from Madras) in monsoon storm. 19 killed of 99 on board.
82-50: (Nierinck 820622): Cover mailed in Madras, and addressed to the U.K. salvaged from the wreck, and bears the violet cachet DAMAGED AIR ACCIDENT TO FLIGHT NO. AI 403 AT BOMBAY AIRPORT ON 22-6-1982. 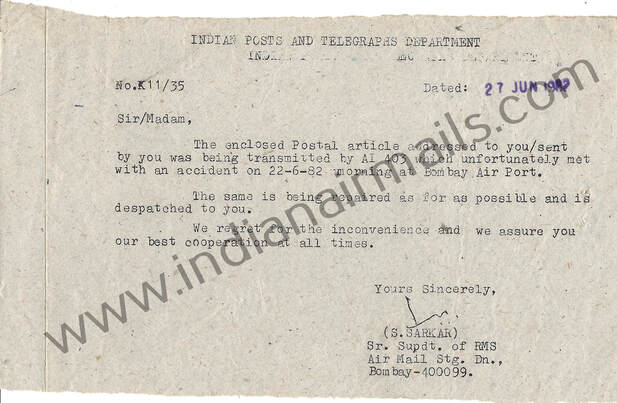 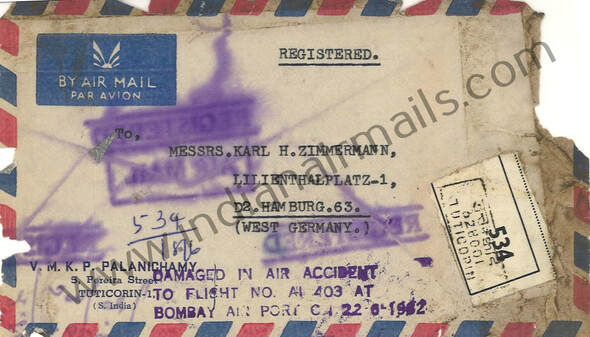 ISC 82.50 (Nierinck 820622a): front part of a Registered Air Mail letter posted in Tuticorin, which boarded the aircraft in Madras and was damaged during the crash while landing in Bombay. Front beast the violet handstamp applied to all covers salvaged from the wreck, and also with this is the Nierinch Type c note added while forwarding the retreived mail. 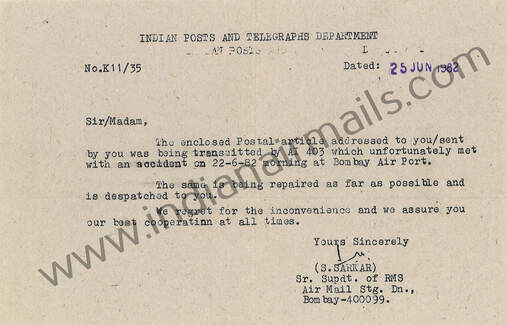 ISC 82-50: (Nierinck 800622) Cover salvaged from the crash with the recovery cachet applied after recovery at Bombay by the postal authorities, and the covering letter below attached by them when returning the same to the sender. 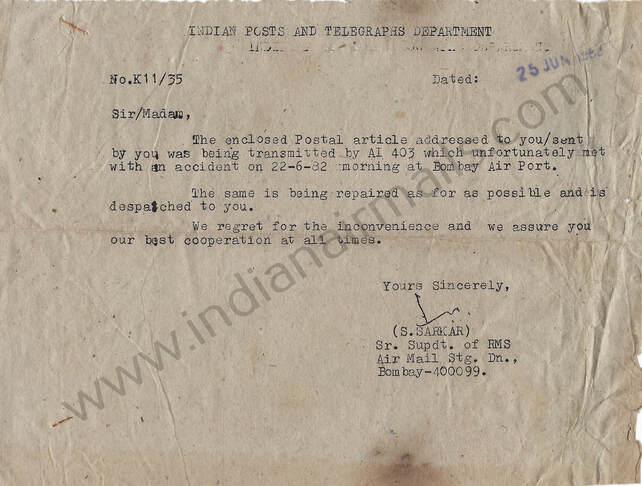