German One Mark Airmail stamp on a postage cancelled with a Date stamp (TSt) FRIEDRICHSHAFEN, Bodensee, LUFTPOST, 24 MAR 29, 10-11N. Also on front is the Confirmation Stamp, LUFTSCHIFF GRAF ZEPPELIN faintly visible on the bottom right corner of the reverse, but hidden because of the similar background colour.

The address for delivery is Messers Diethelm & Co. Ltd., Penang. They were a German trading house with offices in Rangoon, Penang and SIngapore. There is no explaination as to why it was addressed to Penang, India, which is clearly incorrect.
Orient Flight, 25 - 28 March 1929
Friedrichshafen to El Ramale and back
Michel 18 1 h: Cover posted on board the flight, and dropped at El Ramale.
Then sent onwards to Karachi by Imperial Airways.

German One Mark and another 20 pf. Stamp affixed and cancelled with a Board postmark (BPSt) LUFTSCHIFF GRAF ZEPPELIN, 25.2.1929, ​and a Confiramtion Stamp (BSt) on the flight. The Type II brick red cancellation mark was in steel, and used only on board.

The mail then went by air from Gaza to Basrah, and was delivered at Karachi with an arrival stamp on the reverse, KARACHI, DELY 15 APR 29, 5.45 P.M.

There are two things tha make this cover special; firstly, mail posted on board is rare, and secondly, mail being sent onwards by Imperial Airways is rare. A combination of these two rarities makes this cover even more special.
Zeppelin airship LZ 127 Graf Zeppelin, Orient Flight, 25-28 March 1929
Friedrichshafen to El Ramale and back.
Postcard from Vienna to Karachi.
Postal stationary card updated with three additional Austrian frankings and cancelled 1 WIEN 1 / * 5F * / 22 III 29. 10, and a Datestamp  cancellation in black 1/1 WIEN 1 / FLUGPOST / a 22 III 29 11 *. Addressed to Karachi, India and with a greyish blue etiquette Mit Flugpost / Par Avion, and an handwritten endorsement in red ink Mit Luftschiff LZ 127 ab Fridrechshafen. Also on the front is a clear strike of the Type I Confirmation stamp in red purple (BSt) LUFTSCHIFF GRAF ZEPPELIN / ORIENTFAHRT 1929 with a drawing of the Pyramids, Sphinx and the airship.
​
The cover was handed over to the postal authorities at El Ramale, and then continued it’s journey to Karachi by surface.
1st America Flight, May 16-18 1929 and August 1-4 1929
Friedrichshafen to Lakehurst, New York
Provenance: The Lady Ezra Collection
Romano Auction 1 December 2016, Lot # 981 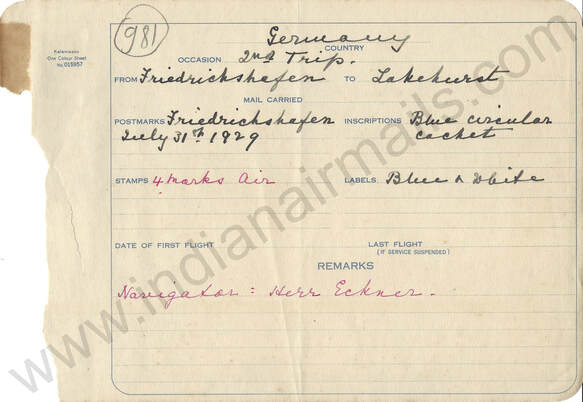 The first America flight departed on 16 May 2016, but was interrupted at Cuers. Mail was brought back to Friedrichshafen and then carried on the flight on 1 August 1929.

The cover is mailed at Friedrichshafen and stamped with the 4 RM Zeppelin stamp, and postmarked Friedrichshafen, 31 JUL 29 (rare date).
Arrival stamp on reverse is NEW YORK, AUG 5 1929, 3 – AM.  From there the cover may have been carried to Calcutta, India, but no postal marks for India delivery appear, so perhaps the cover ended it’s postal journey in Lakehurst, or travelled on the return flight to Gremany.

Cover flown on the New York to Tokyo (via Friedrichshafen), and then sent on to Bombay.
A large Round the World Flight violet Confirmation Stamp, and cover franked with $ 2.05 NHL perfins cancelled HUDSON TREM., SIA, NEW YORK N.Y., AUG 5, 2.30 PM, and arrival mark on reverse, BOMBAY G.P.O., WINDOW, DELY, 16 SEP 29, 8 – A.M.
So, if the cover reached Tokyo on 19 August, it took 28 days for the journey from Tokyo to Bombay, which was perhaps by surface, as compared to 11 days it took from New York to Tokyo.
Swiss Flight (Geneva – Friedrichshafen)
14 September 1930
The Zeppelin LZ-127 Graf Zeppelin Swiss flight from September 14, 1930. The card was picked up by the airship at Geneva and was flown to Kreuzlingen where the mail was dropped. The mail bags came to Zurich where the Zurich arrival postmark ZURICH, LUFTPOST, 14.IX.30 was applied. The card was then sent to Tutucorin, India by surface, arrival cachet: TUTICORIN, 5 OCT 30.
Graf Zeppelin Egypt Flight
Flown from Friedrichshafen to Cairo
Cover sent from Germany to Krishnagiri, South India
​9 - 11 April 1931
LZ 127 Air Ship Graf Zeppelin. flight no. 164.
Cover franked with 2 Reichsmark Zeppelin postage stamp, and tied with Firedrichshappen (Bodensee) 9.4.31 cancellation mark, and Egyptian arrival (SSt) stamp, Graff Zeppelin, Cairo, 11 April 31. Also on the front is a red confirmation stamp (BSt) reading Luftschiff Graf Zeppelin, Agyptenfahrt 1931. Michel 165A) a. III.
Graf Zeppelin Pomerania Flight
Flown Friedrichshafen to Settin
Cover sent from s'-Gravenhage (Holland) to Calcutta (India).
​3 May 1931
LZ 127 Air Ship Graf Zeppelin, flight No. 168.
​Printed flight related post card with franking tied 's-Gravenhage 7.VI.1931. F'hafen departure and Stettin arrival, both on 3.5.31. Arrival cds Park Street Calcutta 25 May 1931, and signed by Stephen Smith on verso with date of arrival. Pommernfahrt (Landing flight to Pommerania) Confirmation Stamp in green. Only 109 items carried (David Feldman - May 3 2013 # 10908)
Graf Zeppelin - Flown Danzig to Friedrichshafen
Cover sent from Danzig (Germany) to Ahmednagar Dist., (India)
31 July - 1 August 1932

The cover perhaps went by surface from Asuncion (Paraguay) to Buenos Aires (Argentina), then on the Condor service from Buenos Aires to Rio de Janeiro and onwards to Friedrichshafen on the Graf Zeppelin LZ 127. Condor and Zeppelin flights were operated as a syndicate.

Biweekly Zeppelin flights were operated from South America, late August through late October 1933. This was the 4th South America Flight of Graf Zeppelin LZ 127 return flight from Rio de Janeiro to Friedrichshafen (via Recife)  between 10th and 18th August 1933.  Rio de Janeiro to Recife (G 325) on 10th and 11th August, and Recife to Friedrichshafen on 12th to 15th August. On the second stage (G 326), the flight carried 110 kg of mail, 21 kg of freight and 16 passengers.

From Friedrichshafen on to Munich arriving on 16th August, and then onward delivery is a mystery. It was too late for IE 229 which had left Croydon on 12 August and by 16 August was in Gaza already, and if it connected on the next weekly flight IE 230 which left Croydon on 19 August, it would have landed in Karachi only on 25th August, too late for the Nowgong 24th August delivery. So it probably found an extremely efficient connection via Air France, KLM or Lufthansa. This needs to be researched further.
Graf Zeppelin - Sixth South American Flight 1933
Flown from Friedrichshafen (Germany) to Pernambuco (Brazil)
Cover mailed from Alleppey
2 -5 September 1933
LZ 127 Air Ship Graf Zeppelin flight No. 333
Cover franked with 12 1/2 a. stamps, tied with Alleppey, 8 Aug 33 cancellation, with Zeppelin Special Confirmation Stamp (BSt) in Dk. Blue. Cover sent from Alleppey via Karachi and Brindisi, then onward to Friedrichshafen before the Zeppelin crossing to South America. Black Friedrichshafen 2.9.33. departure mail and arrival mark Pernambuco 6 IX.33 on front Par Graf Zeppelin and Air Mail Etiquette in Blue. Also on front of the cover is a faint RECOMMANDE cachet in black and cachet in green Via Friedrichshafen Allemange.
​
A study of postage rates, and air schedule will perhaps indicate whether this cover was flown from Karachi on Imperial Airways or Air Orient.
LZ-127 Graf Zeppelin
Sixth South America Flight (Permanbuco-Friedrichshafen on 9-12 September)
From Asuncion, Paraguay to Nowgong, Bundelkhand, Central Provinces, India
Michel 336 B; Frost 127-193.

Air Mail cover sent by registered mail on the 6th South America flight in 1933 of the LZ-127 Graf Zeppelin. The Cover is marked ‘Certificado    / VIA AEREA / per GRAF ZEPPELIN’ and has a registration label ‘R N. 2591 / Oficina de Asuncion’. Franked with four values of Paraguay postage stamps, including three with Zeppelin, including one overprint. Two of these stamps are cancelled by the round Post Special Stamp (Michel SSt) (Frost 127-193con 1 Paraguay, violet), and the other two with the triangular Confirmation Stamp (Michel BSt) in (Frost 127-193 con. 2 Paraguay, violet). Also on front of the cover is a circular date stamp in black SCIO. AEREO POSTAL / PARAGUAY / 2-9.-33. 7-11.

Mail carried by Imperial Airways to Brindisi, thence by ordinary surface route to Frankfurt. Now, in order to reach Frankfurt in time for the 13 August departure by DLH, the cover could have left Calcutta on either IW-466 scheduled to leave on Tuesday, 4 August at 5.30 am, and arriving Brindisi on Saturday, 8 August, or on IW-467 scheduled to leave Calcutta on Thursday, 6 August at 5.30 am and arriving Brindisi on Tuesday, 11 August. Either way it was well in time for the weekly pendulum service by DLH or DLH/LZ to S. America.

Red circular DLH confirmation stamp (Bst) with distinctive letter ‘c’ denoting Frankfurt au Main as the post office. Flown by flight G 547 via DLH from Frankfurt on 13 August, via Marsailles and on to Montelimar, arriving the same day at 12.07 pm, and transferred to Graf Zeppelin LZ-127 shortly thereafter and arriving at Recife on 16 August at 08.17 am. (ref: Commercial Zeppelin Flights to S. America – Duggan & Graue, p. 80) and transferred from DLH to LZ at Lisbon on 13 August, according to Proud (Intercontinental Airmails Vol 1, p. 335). Then again by DLH to Rio-de-Jeneiro arriving on same date, 16 August. There is an arrival mark on the reverse, CORREIO AERIO, DISTRICTO PERMANBUCO, 16 AGO 1936.
Return to Zeppelin Home Page
Important Copyright Notice: The information and images contained in this web-site cannot be copied or used for any purpose without permission. Copyright of some items listed here belong to other respective owners, and some belong to us, while some are from the public domain. Hence, in order to avoid future complications, please contact us for any such requirement, by clicking this link, and we will respond appropriately. Any violation of this policy, may lead to prosecution of a Civil or Criminal nature, or both, solely at the infringers risk and cost.