36-90
1936 Madras to Colombo via Trichinopoly
Indo-Ceylon Special Christmas Flight
Whilst air mail services had been established for most of the major cities of India, Ceylon had remained largely ignored. However, the groundwork for regular flights was laid in 1931.  On 7 May 1931, Nevill Vintcent, Deputy Director of Civil Aviation in India, flew a De Havilland DH80A Puss Moth G-AAXJ (the first aeroplane to have been seen in Ceylon) from Colombo to Bombay carrying a special airmail edition of the Times of Ceylon.  On 2 April 1932, Vintcent made a survey flight from Bombay to Colombo via Madras to provide data for Tata’s proposed regular service to Ceylon.
Following an agreement between the postal authorities of India and Ceylon, Tata Sons Ltd were given permission to fly Christmas mails from Madras to Colombo via Trichinopoly in December 1936. There were two flights, the first leaving Madras on 23 December with Indian mails only, returning on 24 December. The second flight, intended for British mails, completed the return journey on 24 December. However, the Imperial Airways flight (IE.506) from London was delayed with the result that only about 31 lbs of mail (about 3,000 letters) were carried.
The flights were made by Mr Homi Bharucha in a Miles M4A Merlin VT-AHC.  Covers are known signed by him.
Regular airmail service to Ceylon was not inaugurated until 28 February 1938, with the introduction of the Empire Air Mail Scheme

ISC 36-90: Souvenir cover of Tata airlines cancelled with the large boxed cancellation FIRST SPECIAL AIRMAIL / INDIA – CEYLON / DECEMBER, 1936 and violet round cachet INDO-CEYLON AIRMAIL / SPECIAL / FLIGHT / X’MAS / 1936. Also on the front is a cds TRICHINOPOLY / 23 DEC 36 / 11.15 A.M. and on the reverse is the machine roller cancellation with a boxed CHRISTMAS MAILS / PLEASE POST EARLY and outside the box is COLOMBO / 6.- PM / 23 DEC 36. The cover also has an oval TATA SONS LTD. BOMBAY / AVIATION / DEPT. handstamp and is signed by H. D. Engineer. 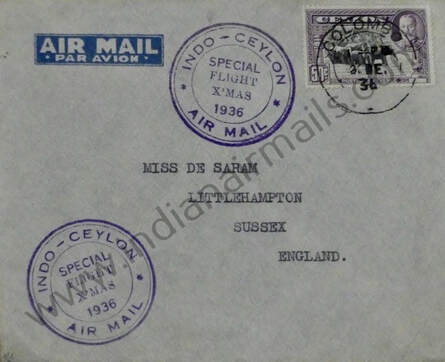 Addressed to “Tata Sons Ltd., Aviation Dept., Care Madras Flying Club Ltd., Madras.”
Important Copyright Notice: The information and images contained in this web-site cannot be copied or used for any purpose without permission. Copyright of some items listed here belong to other respective owners, and some belong to us, while some are from the public domain. Hence, in order to avoid future complications, please contact us for any such requirement, by clicking this link, and we will respond appropriately. Any violation of this policy, may lead to prosecution of a Civil or Criminal nature, or both, solely at the infringers risk and cost.