Postage Rates - A comedy of errors

The Postal Notice above clearly mentions acceptance of mail on this flight for carriage to Cairo, Geneva and London, and onward destinations. Now the minimum Letter rate for Air Mail was 12 as. for London, and the 12 as. stamp issued was just fine. Apparently, while issuing the stamp, the postal authorities overlooked the fact that the rate for Cairo was just 10 as., and hence all mail to Cairo with this stamp meant that postage was overpaid by 2 as. This in itself would be comic enough, but the matter was complicated further with the franking of mail to Geneva. The equivalent rate for mail to Geneva was 14 as., and hence if all letters were simply franked with the 12 as. stamp then they would be under franked by 2 as., and the postal authorities in India would be correct in refusing to carry these letters, or for the Swiss postal authorities to tax the mail. The Swiss postal authorities were kind enough to allow most of the understamped mail to pass through without taxing it, but examples with 'postage due' stamps and marks do exist and are very collectible.

Franking on covers to Cairo 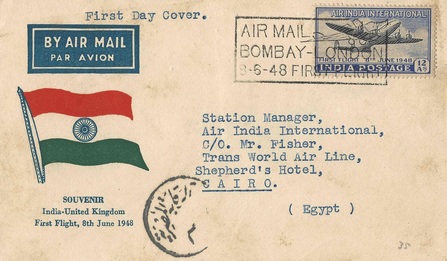 Top row: Postal Dept. souvenir cover with 12 as stamp. Overstamped by 2 as.
Bottom row: the front and verso of a registered cover to Cairo, franked 16 as. The correct rate was 14 as. (10 as. Airmail rate + 4 as. Registration charge), and the sender, a reputed stamp dealer, could have easily added 2 as. additional postage, but chose to add 4 as. as registration fee separately.

Franking on covers to Geneva 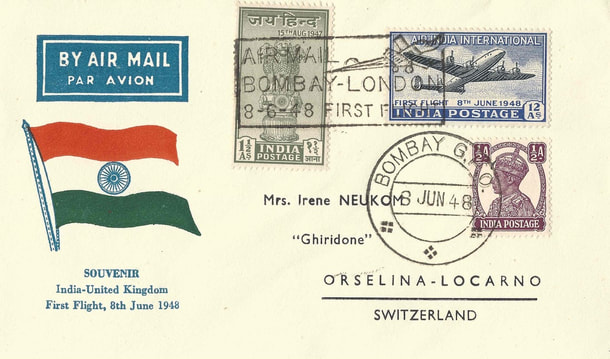 Top : Correctly franked 14 as. airmail letter rate for Geneva.
Top Left: Correctly franked 18 as. registered airmail letter rate to Geneva.
Top Right: Registered Souvenir flight cover to Muri near Berne. Reverse shown with strikes of Larger Geneva Express Letter cds of 9th June (found on all such registered covers) and Muri delivery cds 10th June. 25 as franking thus over paid by 7 as.
Top Left: Official Souvenir Cover to Berne, Switzerland, with the correct 14a. postage.
Top Right: Cover under stamped by 2 as. and so 50 Cents postage due stamp applied in Switzerland. The majority of under stamped mail was allowed to pass through that day as a courtesy, but I think that was more for mail to Geneva. Post offices at other destinations were perhaps not so benevolent. 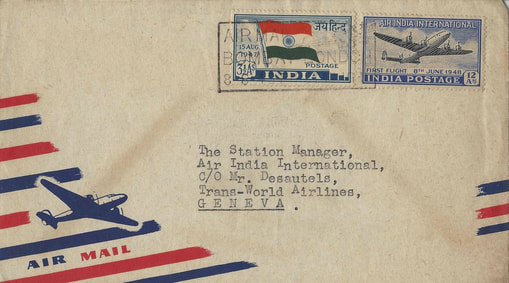 Top: Cover over stamped by 1 1/2 as. Here, the sender could have added just 2 as. stamps to make the total 14 as., but chose to stamp it, perhaps in a moment of patriotic fervor, with a 3 1/2 as. National Flag stamp.

Franking on covers to London 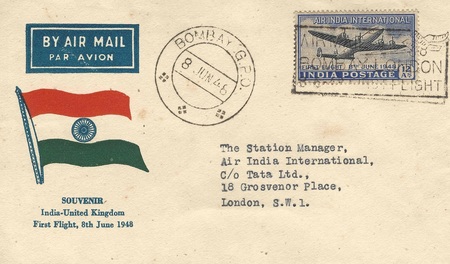