Once you read the DG's circular and the Postal Notices listed elsewhere in this website,  you will learn that while the sale of stamps was permitted starting on 29th May 1948 until 5th June 1948 only at various post offices across India, no post office was permitted to cancel these stamps on the date of issue, or even anytime after that, except the G.P.O. at Bombay which was to use the special boxed rectangular cachet on the day of the flight, 8th June 1948. Hence, according to the postal instructions, no covers bearing the First Day of Issue cancellations were supposed to exist. However, a few examples of covers cancelled on 29th May 1948 do exist, and they are much sought after by collectors.

Air-India International Souvenir cover with 2 x 12 A Air-India International stamp being sent by registered post from Cawnpore (Kanpur) to Hamilton, Ontario, Canada. Cancelled CAWNPORE / 29 MAY 48, it bears a rare first day of issue cancellation. The reverse has two clear postal marks. The first is a transit mark,  MONTREAL / CANADA / 5 JUN 48, and the second is the arrival mark, HAMILTON / CANADA / JUN 5 48. Both these marks clearly establish that the 29th May cancellation at Cawnpore was not a favour cancellation obtained at a later date, because in fact the cover needed to be posted in Cawnpore on 29th May in order to reach Canada on 5th June.

Decviation: Churchgate Street P.O. should not have cancelled the stamp with the 29 MAY 48 datestamp. All the more, given that this was not even a registered cover. 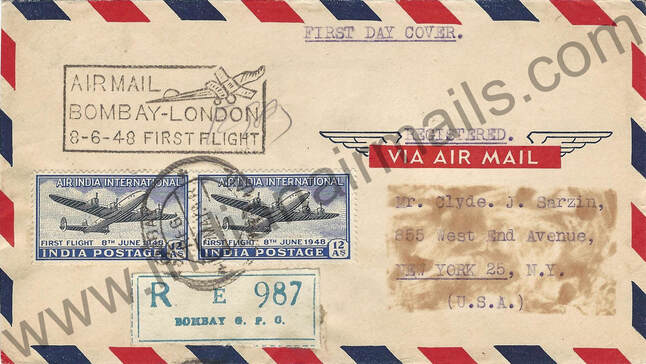 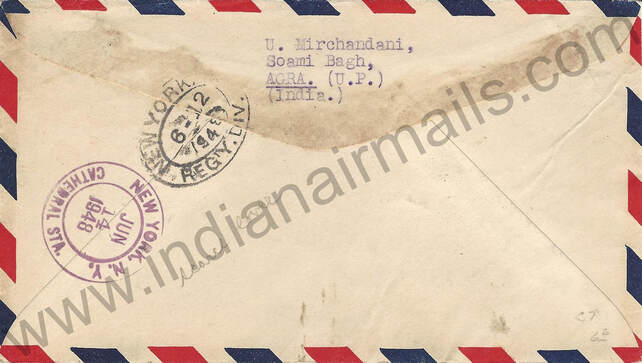 ​Registered Air Mail cover with the sender address as Agra (U.P.) and addressed to New York, U.S.A. Cover was posted at Bombay G.P.O. And has 2 of the 12 as value stamps issued on the occasion. Contrary to Postal Department instructions, the stamps are cancelled 29 MAY 48, which is the first day of issue of the stamps, thereby making this a First Day Cover. Also bears the boxed rectangular First Flight cachet of 8 June 1948, and Jun 12 1948 and Jun 14 1948 New York arrival and delivery marks. 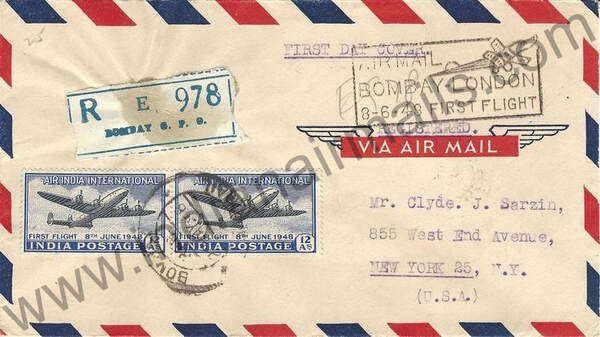 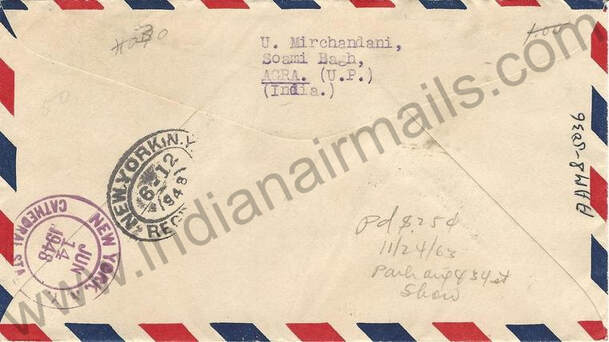 ​Registered cover, with 2 x 12 as stamps issued on 29 May and having the first day cancellation, BOMBAY, AIR MAIL, 29 MAY 48. This makes it a First Day Cover. Also visible is the registration label R E 978, BOMBAY G.P.O. The cover also has the First Flight cachet, establishing that is was carried on the first flight on 8 June 1948 as well to London, and onward from there to New York. making this cover a very interesting First Day Cover - cum - First Flight Cover. On the reverse is the senders name and address at Agra. It is apparent that the cover was mailed at Bombay G.P.O., and not at Agra. Also visible on the reverse is the transit mark at New York dated June 12 1948, and delivery mark at Cathedral Street, New York dated June 14, 1948.

Cover with the 12 A Air-India International stamp and cancelled with a circular NEW DELHI / 29 MAY 48 cancellation. This is a first day of issue cancellation, and there is no evidence that this cover was postally carried. Hence it could just be a favour cancellation at the post office window. This goes against the departmental rules disallowing post offices from cancelling the stamp locally, and asking for all mail to be sent to G.P.O. Bombay (Mumbai).

Deviation: Should not have been cancelled locally as a favour cancellation.
​These stamps were meant to be cancelled by Bombay G.P.O. only.
Air-India International, First Flight from Bombay to London
8th June 1948
Correct Postal treatment of attempted First Day cancellation

Outfoxed by the Postal Department
The sender perhaps affixed both the 12 anna value stamps and attempted postal cancellation at Madras on 29th May 1948. If he succeeded, the Air-India International issue would have obtained a First Day of Issue cancellation, which was contrary to Postal Instructions. However, the post office at Madras only cancelled the KGVI 12 anna stamp MADRAS / 29 MAY 1948 and passed the cover on to Bombay GPO where the 8th June commemorative cachet was applied and the cover then flown to London.
Back to Aerophilately Home Page
Important Copyright Notice: The information and images contained in this web-site cannot be copied or used for any purpose without permission. Copyright of some items listed here belong to other respective owners, and some belong to us, while some are from the public domain. Hence, in order to avoid future complications, please contact us for any such requirement, by clicking this link, and we will respond appropriately. Any violation of this policy, may lead to prosecution of a Civil or Criminal nature, or both, solely at the infringers risk and cost.