Special large rectangular illustrated Air Mail covers were issued by Air-India. Colourful, with a large bold red panel on the top, and a smaller greenish blue panel below, they had a oval white space to print the address. The cover had a drawing of the Lockheed Constellation L-749A Mogul Princess (VT-CQS), one of the first three aircraft delivered to Air-India. In fact, it was the Malabar Princess (VT-CQP) that actually had the honour of undertaking the maiden voyage.
Also notice in all the covers below that they do not contain the BOMBAY G.P.O., 8 JUN 48 circular date stamp. It seems that these were cancelled elsewhere, perhaps at the Bombay airport.
Air-India International flight from Bombay to London 8 June 1948.

Air-India International Souvenir Cover franked with the 12 as  commemorative stamp issued for the flight, and tied with the special flight cachet as well as circular BOMBAY G.P.O., 8 JUN 48 postal cancellation mark. However, the cover is not addressed to anyone, and not flown. This is the first example I have seen of a cover with such characteristics.

Air-India Souvenir cover addressed to Cairo. has the 12 as. stamp, and was over-stamped by 2 as., as the Letter rate by Air Mail to Egypt was only 10 as. Arrival stamp in Arabic script on the front of the cover as well. 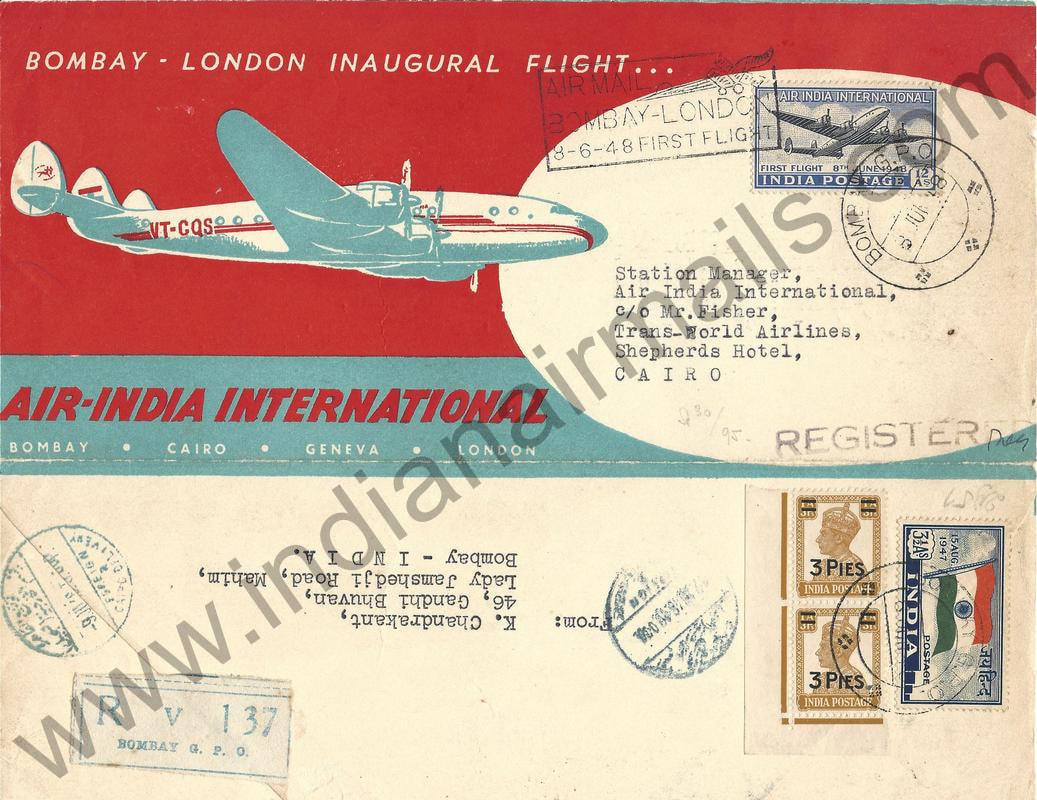 948.1.2 Addressed to Cairo
Registered Souvenir cover, produced by Tata Limited, with the single value 12a. stamp and 4 as franking (registration fee) on reverse, with the official first day of issue Bombay cancellation. The postage to Egypt was 10a. and the cover was over stamped by 2a. Despite instructions that other cancellation was to applied on the 12a. stamp, it is tied with a Bombay G.P.O., 8 July 48 postal handstamp.

Air-India Souvenir cover addressed to Geneva. Since the postage rate to Geneva was 14 as. the sender has correctly added 2 as. postage on the reverse. Arrival mark at Geneva (9-VI 48) is also on the reverse.

Air-India Souvenir cover addressed to London. Correctly franked with the 12 a. airmail letter rate, the cover does not have any arrival mark at London. The Postmaster at London G.P.O. was clearly unhappy at the thought of Air-India carrying mail to London, something done exclusively by B.O.A.C. so far, and he expressed his displeasure by refusing to affix arrival marks on these covers. However, examples of arrival marking in the U.K. do exist, and I have displayed these elsewhere in this gallery.

Air-India Souvenir Cover with a block of four of the commemorative 12 as value stamp issued for the occasion, and cancelled by the regular BOMBAY G.P.O. 8 JUN 48 cachet. While it seems a fair conclusion that the cover was flown on the 8 June flight, there is no marking of the boxed rectangular souvenir cachet used that day. I have only seen a handful of such examples.

Air-India International First Flight from Bombay to London 8 June 1948
Unusual Place of Origin – Patna; Stationary fold error on cover
Air-India International souvenir cover with the 12a value stamp issued for use on that date and posted with a Patna return address. Unusual place of origin. The envelope is also folded wrongly, and the powder blue portion of the bottom is also visible on the top.

Air-India International First Flight from Bombay to London 8 June 1948
This is souvenir cover sent from Bombay to Geneva. Cover is underpaid 2as, as the postal rate for the Europe other than London was 14as. Cachet applied on the cover is Type C.
Back to Aerophilately Home Page
Important Copyright Notice: The information and images contained in this web-site cannot be copied or used for any purpose without permission. Copyright of some items listed here belong to other respective owners, and some belong to us, while some are from the public domain. Hence, in order to avoid future complications, please contact us for any such requirement, by clicking this link, and we will respond appropriately. Any violation of this policy, may lead to prosecution of a Civil or Criminal nature, or both, solely at the infringers risk and cost.