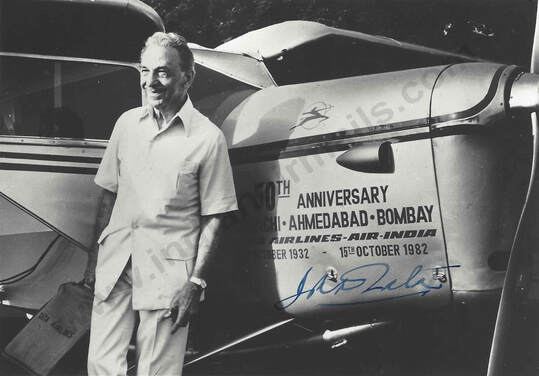 We illustrate above the suggested design which has been approved by Messrs. Tata and Sons to be used on the extension of the Indian Air Mail Services to Madras, the first flight of which was due to be flown in October, 1932.
​Rare cover signed by Mr. J.R.D. Tata

The special cover illustrated above for the projected extension of the Indian Air Mail Services was approved on the 27th June. On the 26th July, after 750 of these had been disposed of in readiness for the flight, the sale of these covers was stopped in India by the Technical Adviser of Messrs. Tata Sons, Ltd., who stated that the Union Jack spoilt the design, so that all future printings were to have the Union Jack omitted. Persons residing abroad can use the design illustrated, whilst all persons iin India must use the new envelope. As there was no need for red to appear on the cover., owing to the Union Jack being removed, Mr. Smith obtained permission to change it to the more natural colour of yellow. The new covers were printed on the 17th August. There has, however, been a very small sale for the new covers, but only those of this design have been sanctioned by Messrs. Tata Sons Ltd.
(Image Courtesy: Kiran Natrajan,Bangalore) 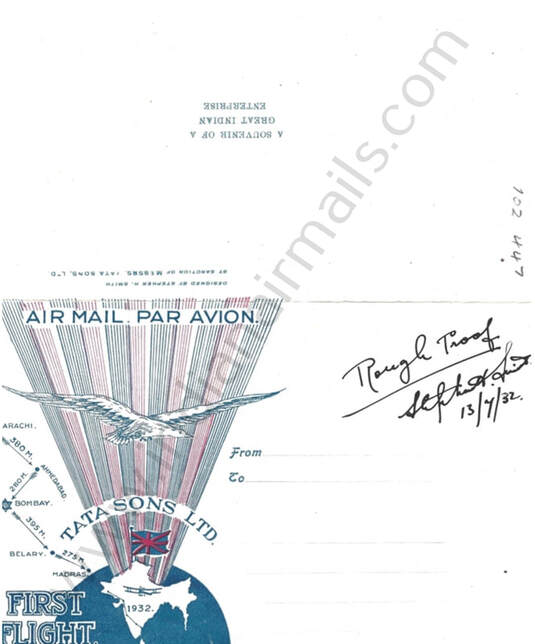 A rare ‘Rough Proof’ of the Type 1a Cover designed and signed by Stephen H Smith on 13th July 1932, about 3 months before the date of the first Airmail flight.
Specimen of Type 1a Cover (with Union Jack) with important historical data annotated by Stephen H Smith
2,000 such covers were printed, but on 26th July 1932 after 11 days of release, sale of these covers were stopped and these covers were withdrawn. By then already 1,250 covers were sold.
India was going through her struggle of freedom from British rule, and the use of a cover with Union Jack was considered unpatriotic in India and there were protests leading to the abrupt withdrawal of this cover from sale. 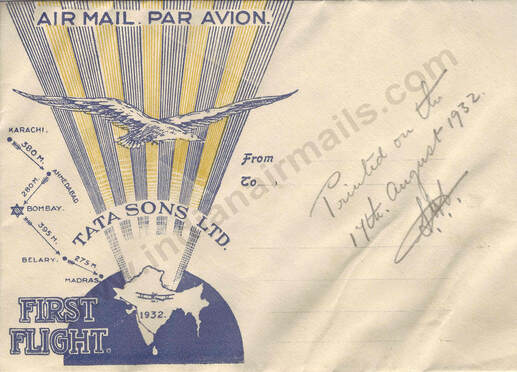 Specimen of Type 2 Cover
Given the political situation in India, following protests, Tata withdrew the permission for the Type 1 cover and the Union Jack was removed from cover design and the Red colour was replaced with Yellow. Sale was restarted after 17th August 1932 and only 750 covers of Type 2 were sold.
Specimen Type 2 Cover with out union Jack, with important historical data annotated by Stephen H. Smith 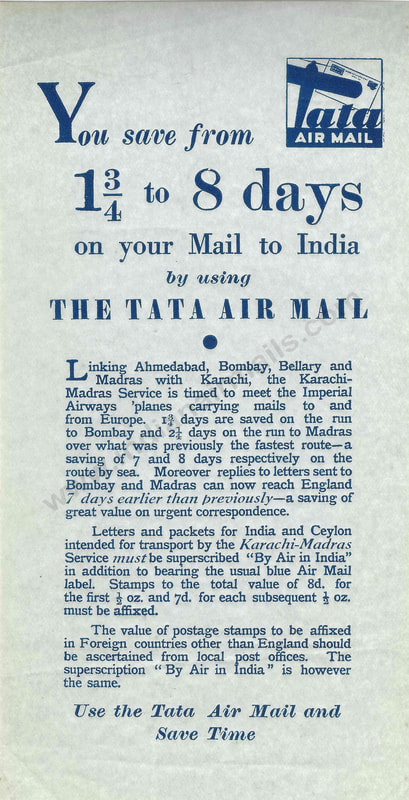 Postal Publicity Leaflet published for distribution in Britain with information on availing the airmail service from Britain, postal rates and superscription required on the cover.
Airmail Labels published by Tata, authenticated by Stephen H Smith.
Postal Souvenir Card by Francis J Field
Very Rare and not much seen card folder produced by Francis J Field for the First Airmail Flight of TATA Sons Ltd. The post card shows the route from Karachi to Madras (via Ahmedabad, Bombay and Bellary) and how it connects to the Imperial Line to London and rest of the world. Francis John Field was a philatelist and Stamp Dealer who specialised in Aero-philately and was entered in the Roll of Distinguished Philatelists in 1968.
Important Copyright Notice: The information and images contained in this web-site cannot be copied or used for any purpose without permission. Copyright of some items listed here belong to other respective owners, and some belong to us, while some are from the public domain. Hence, in order to avoid future complications, please contact us for any such requirement, by clicking this link, and we will respond appropriately. Any violation of this policy, may lead to prosecution of a Civil or Criminal nature, or both, solely at the infringers risk and cost.