The post card has been cancelled with a FRIEDRICHSHAFEN, 1.9.36 mark and has a delivery mark LILUAH, DELY, 17 SEP. 36, 3 PM. It also bears the oval red cachet ZUR ERINNERUNG, AN DIE BESLCHTLGUNG, DES LUFTSCHIFFEN, IN FRIEDRICHSHAFEN, which also bears the line drawing of the Zeppelin airship.
RyanAir First Flight
B737 - FR 9089 Friedrichshafen to Alicante on 27 October 2009 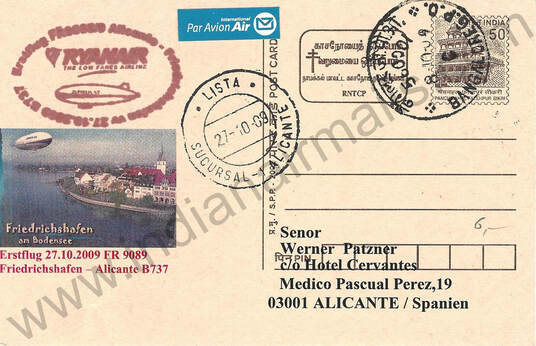 Department pf Posts, India. 50p stationery post  card cancelled BANGALORE G.P.O., 8-10-2009, with a pre-printed RyanAir First Flight message, and arrival stamp, LISTA, SUCURSAL-1, ALICANTE, 27-10-09
Return to Zeppelin Home Page
Important Copyright Notice: The information and images contained in this web-site cannot be copied or used for any purpose without permission. Copyright of some items listed here belong to other respective owners, and some belong to us, while some are from the public domain. Hence, in order to avoid future complications, please contact us for any such requirement, by clicking this link, and we will respond appropriately. Any violation of this policy, may lead to prosecution of a Civil or Criminal nature, or both, solely at the infringers risk and cost.