Such was the interest in this flight, that persons from all across India prepared covers to be flown on this flight, some from places of origin you cannot imagine. Likewise, all mail was not addressed only to Cairo, Geneva and London. Mail was sent far and wide using the halts are trans-shipment points. In the gallery below, we present a selection of interesting covers from this perspective.

Cover to Azores, a small island in the Atlantic, and important entrepot for sea voyages to the new world, and one of the two autonomus nations of Portugal. Scare destination, perhaps unique. On the reverse, transit mark C.T.T., AEROPORTO SANTA MARIA, 13.6.48 and arrival mark C.T.T., HORTA, 20 JUN 48. Correctly franked with the 14 as. airmail letter rate for European destinations. 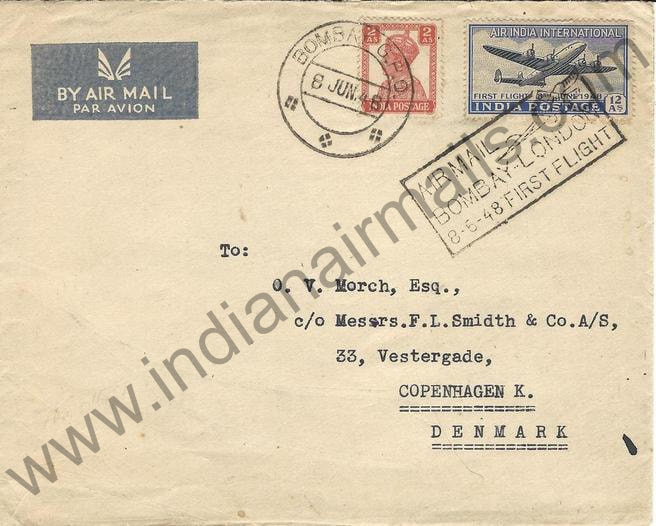 Top: Letter carried on the Air-India International flight on 8 June 1948 from Bombay to London, and onward to Copenhagen.
Correctly franked with the 14 as postage rate. Example of an interesting destination for mail on this flight.
Top: Cover to Durban, South Africa. Flew Air-India to Cairo, and then other airlines to S. Africa.
Correctly franked with the 14 as. airmail letter rate.
Postal Department souvenir cover correctly franked 14as including the 12as Air- India International postage stamp,
​and addressed to Gotsborg, Sweden.
Air-India International souvenir cover franked with the 12a commemorative stamp and cancelled with the boxed rectangular cachet used that day addressed to Guernsey, Channel Islands. These are not part of the UK, but are considered as Crown dependencies.These islands were the only part of the British Isles under German occupation during WW2.

The address has ‘Panchpara’ in the address, perhaps the name of the cottage. Panchapara is the name of a village in the 24 Pharganas District in W. Bengal, and I wonder if there is a past connection of the addressee with India.
Cover with two of the 12as value stamps issued for the occasion, and addressed to Jamaica, British West Indies (B.W.I.), and on the reverse arrival mark HALF-WAYTREE, JAMAICA, JU 11 48. The cover flew from Bombay to London on the Air-India International flight, and then onwards to Jamaica using other airlines.

Top: Cover to Olhao, Algarve, Portugal. Flew to London on Air-India, and then onward to Portugal. Franked with 2 x 12 as. postage stamps, it was over stamped by 10 as. The correct postage was 14 as. which was the airmail letter rate to Europe.
Return to Aerophilately Home Page
Important Copyright Notice: The information and images contained in this web-site cannot be copied or used for any purpose without permission. Copyright of some items listed here belong to other respective owners, and some belong to us, while some are from the public domain. Hence, in order to avoid future complications, please contact us for any such requirement, by clicking this link, and we will respond appropriately. Any violation of this policy, may lead to prosecution of a Civil or Criminal nature, or both, solely at the infringers risk and cost.