As an Aerophilatelist, the first Air-India flight on 8th June 1948 from Bombay to London, holds a special place in my heart. I have spent many happy days reading up and researching this event, and built an interesting collection of airmail covers and other ephemera around the flight which I will present in this section.

The significance of the event itself can be gauged by the circumstances surrounding the flight. India was a newly born dominion, and attained Independence in August 1947, just a few months ago. Independence also brought about vivisection of our nation into India and Pakistan. Just as we were settling down to nation building, this partition resulted in the greatest migration in history as people from one nation tried to cross over to the other, and violent riots and other atrocities followed. In the middle of all this and various other challenges in dealing with division of vital national assets and government machinery, we were left with a nation impoverished because of the huge loans India gave to Britain to deal with the British war effort.

Around this time, Mr. J. R. D. Tata (JRD) wrote to Mr. Nehru, our Prime Minister, suggesting that the Government of India sponsor an international airline, and out of this, Air-India International was born in March 1948. The airline was owned 49% by the Govt. of India, 25% by Tatas, and 26% by other shareholders, with the Govt. having an option to increase their shareholding by 2% any time, at their option.
On account of an order cancellation by another airline, Air-India managed to get delivery of 3 Lockheed Constellation L-749A aircraft very soon thereafter, and planned their first commercial flight on 8 June 1948.

Scarce footage from a short Films Division documentary on the first Air-India flight. The Malabar Princess flew from Bombay to London on 8 June 1948, and carried the Indian Tricolour over international skies for the first time. This is a poor quality camera copy of the documentary being projected in a function much later. It is in Hindi, and I will post sub-titles in English sometime later.
So, back to our story:
Besides the circumstances under which the airline was born, this flight has many interesting features for the philatelist. I will attempt to bring them out in this gallery.

Prologue: The fist stamp issue of an independent nation 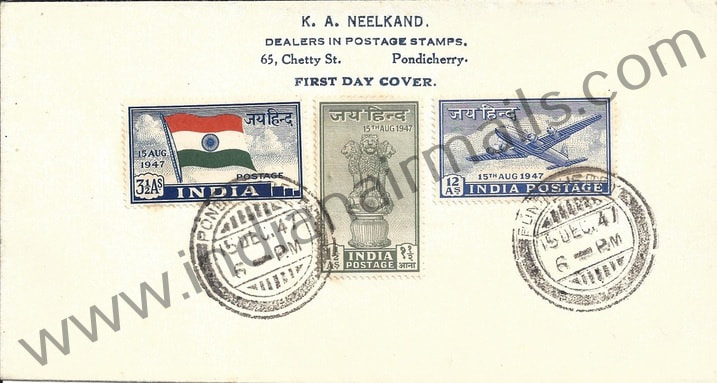 Independent India had just released one set of three postage stamps until the Air-India issue. The 3 1/2 anna value stamp on the top left was issued on 21 November 1947, and the other two values on 15 December 1947. Here we see all three stamps with a clear strike PONDICHERRY, 15 DEC 47, 6-PM. The 12 anna stamp shows the Douglas DC-4 Aircraft, and this was the base airmail letter rate to Britain.

The postal authorities decided to issue a special commemorative stamp for the Air-India flight on 8 June 1948. All the more, they decided that this would be printed in limited quantities, and be valid only for use on the day of the flight, and that too, only on mail to be flown on that flight. This was something really unique. Imagine a postage stamp issued valid for use on only one day, and on only one plane journey, from Bombay to London, via Cairo and Geneva.

The importance given to this flight can even be understood when we consider that Mahatma Gandhi, the father of our nation, was assassinated on 30 January 1948, and even the set of stamps issued to honour his memory were issued later, on 15th August 1948, after the Air-India issue. Really, the launch of the Air-India International service was an event the entire nation was proud of!

So, 570,000 stamps were printed, and issued. A set of postal notices and DG circulars were put out explaining how these were to be distributed and used, and the special arrangements being made for carriage of these stamps on the flight. 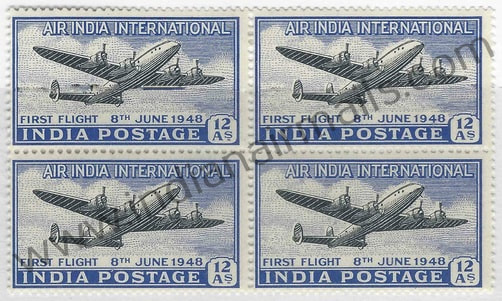 A block of four 12 as value stamps issued to commemorate the first flight from Bombay to London. The stamp shows a Lockheed Constellation L-749A Airplane with the legend AIR-INDIA INTERNATIONAL, FIRST FLIGHT, 8TH JUNE 1948, INDIA POSTAGE, 12 AS.

Once you read the DG's circular and the Postal Notices listed below, you will learn that, while the sale of stamps was permitted, starting on 29th May 1948 at various post offices across India, no post office was permitted to cancel these stamps on the date of issue, or even anytime after that, except the G.P.O. at Bombay which was to use the special boxed rectangular cachet on the day of the flight, 8th June 1948. Hence, according to the postal instructions, no First Day Covers were supposed to exist. However, a few examples of covers cancelled on 29th May 1948 do exist, and they are much sought after by collectors.
First Day Covers
The Director General's Post Office Circular and the Postal Notice
Please read these documents very carefully. They contain the essence of this fascinating tale.
DG's Circular & Postal Notice Gallery

There are three known types of constant errors in these stamps. They are illustrated above.
Postage Stamps - Constant Errors

﻿Special small white Air Mail covers with the Tricolour and the first flight legend for the event were issued free of cost by the postal authorities and  larger red colour covers with an image of the aircraft and the legend were issued by Air-India as well.

Postage Rates - A comedy of errors

The Postal Notice above clearly mentions acceptance of mail on this flight for carriage to Cairo, Geneva and London, and onward destinations. Now the minimum Letter rate for Air Mail was 12 as. for London, and the 12 as. stamp issued was just fine. Apparently, while issuing the stamp, the postal authorities overlooked the fact that the rate for Cairo was just 10 as., and hence all mail to Cairo with this stamp meant that postage was overpaid by 2 as. This in itself would be comic enough, but the matter was complicated further with the franking of mail to Geneva. The equivalent rate for mail to Geneva was 14 as., and hence if all letters were simply franked with the 12 as. stamp then they would be under franked by 2 as., and the postal authorities in India would be correct in refusing to carry these letters, or for the Swiss postal authorities to tax the mail. The Swiss postal authorities were kind enough to allow most of the understamped mail to pass through without taxing it, but examples with 'postage due' stamps and marks do exist and are very collectible.
Postage Rates Gallery

The Postal Authorities had made arrangements for all mail to be carried on this flight to be sent to the Bombay G.P.O., where they would use a special boxed rectangular cachet to cancel the postage stamp. This special boxed cachet had an illustration of a vintage airplane, and the words AIR MAIL, BOMBAY-LONDON, 8-6-48, FIRST FLIGHT. These were applied in Bombay only, regardless of where the letters were posted.

Despite clear instructions to all post offices not to deface stamps, and to send all mail for this flight to Bombay G.P.O., some post offices applied local cancellation marks, and the covers still made it on the flight. So, the stamps were cancelled locally, but the boxed cachet was applied in Bombay. 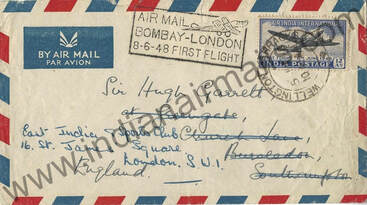 Some philatelists and stamp dealers produced private covers/cachets to commemorate the flight, and sent mail on this service using them. An excellent listing of these was first published by Praful Thakkar in his Collectors Guide to First Day Covers etc. in 2010. These covers are illustrated in my gallery reachable by clicking the button below.

Such was the interest in this flight, that persons from all across India prepared covers to be flown on this flight, some from places of origin you cannot imagine. Likewise, all mail was not addressed only to Cairo, Geneva and London. Mail was sent far and wide using the halts are trans-shipment points. In the gallery below, we present a selection of interesting covers from this perspective.

There are several other interesting aspects to study when collecting flight covers related to this flight. Some of them are:In this section I have displayed multiple examples of each type, and provided an explanation where needed.
More Interesting Covers gallery

The Return flight left London on the morning of 12 June, landing in Bombay on 13 June after halting at Geneva and Cairo. Return mail on this flight is not very common, and only a limited number are thought to exist. Each of the three points of origin have an interesting story, which I will recount in this page. Additionally, no mail originating from any other location has been seen.
Return Flight Covers Gallery
Other Philatelic Curiosities 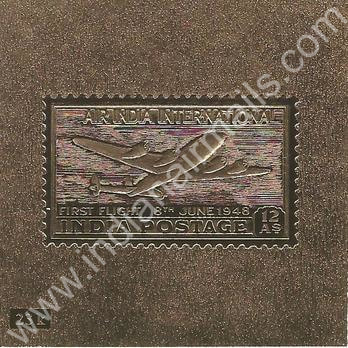 Silver Medal winning exhibit of Ashish Talwar - Braziliana 2013
Enjoy this superb and very informative single frame exhibit by Ashish Talar, Delhi's leading professional philatelist, and expert on Air-India flight mail.
Award Winning Exhibit Page
Back to Air-India Collector Home Page
Important Copyright Notice: The information and images contained in this web-site cannot be copied or used for any purpose without permission. Copyright of some items listed here belong to other respective owners, and some belong to us, while some are from the public domain. Hence, in order to avoid future complications, please contact us for any such requirement, by clicking this link, and we will respond appropriately. Any violation of this policy, may lead to prosecution of a Civil or Criminal nature, or both, solely at the infringers risk and cost.