This section displays covers not only mailed from locations other than Bombay, but also the same covers addressed to places other than Cairo, Geneva and London. A rather interesting bunch of covers, some with other features of philatelic interest as well.
Official Souvenir Cover with a block of four of the commemorative 12 as value stamp issued for the occasion, and cancelled by the boxed rectangular souvenir cachet used that day. Cover sent from Baroda to Chile and flown from Bombay to London on the 8 June 1948 First Flight of Air-India International.
Top: Cover mailed from Calcutta, and sent to Bombay where the boxed cachet was used as an obliterator on the 12 as postage stamp. Addressed to Geneva, and under stamped by 2 as., but allowed without tax as a courtesy by the Swiss postal authorities. GENEVA EXP. LETTRES 9-VI 1948 arrival mark with the accompanying boxed cachet clearly visible on the reverse.
Then on the front, a circular GENEVE, EXP. LETTRES, 26.VII 48 hand stamp denotes the date the cover was returned. Now the question is whether the cover was returned to Calcutta or the Christchurch address on the reverse written in black. We do not find any Indian postal arrival marks on the cover to establish a return journey to India, but the CHRISTCHURCH, N.Z., 15 SEP 1948, denotes a gap of 51 days from the time the cover left Geneva and arrived in Christchurch. I would guess that the cover was returned to Calcutta first because the 'Back to Sender" endorsement on the front is using a different ink colour (blue) and handwriting as compared to the black ink for the first Christchurch address. The journey did not end with this. Upon arrival in Christchurch, the letter was once again re-directed to another destination in the same city, this time written in red. 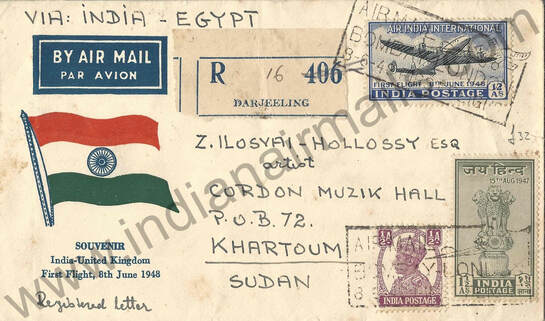 Official souvenir cover sent by Registered mail from Darjeeling to Khartoum, Sudan, with the correct 14 as postage
​(10 as Airmail letter rate, and 4 as. Registration fee)
Air-India International souvenir cover flown from New Delhi, India to Guernsey, Channel Islands on inaugural First Flight of Air-India International from Bombay to London on 8th June 1948. Cover carry 12as value stamp and have special flight cachet applied Type B. 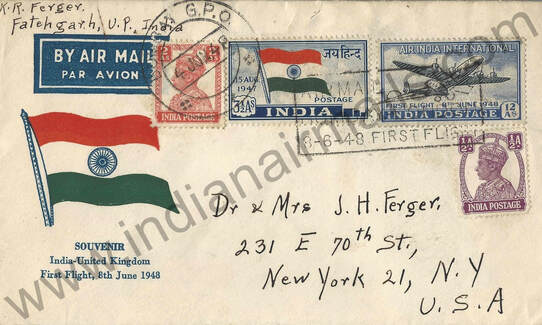 Official souvenir cover sent from Fatehgarh U.P. to New York, NY, U.S.A., with the correct 18 as. airmail letter postage rate for the U.S.A.
Top: Official souvenir cover sent from Jamshedpur, Bihar, to Toledo, Ohio, U.S.A., with the correct 18 as. airmail letter postage rate for the U.S.A.
Top: Registered souvenir cover franked with 2 x 12 as. first flight stamps, and posted from Lucknow, and sent to Howick, S. Africa. On the front, LUCKNOW 25 registered label, and on the reverse a round LUCKNOW G.P.O., REG, 1 JUN 48 date stamp.
Also on reverse, a HOWICK, xx JUN 48 arrival stamp.
Top: Plain cover, with a BY AIR MAIL violet hand stamp, sent from Hyderabad, Deccan, and addressed to Bavaria, Germany (American Zone). Also on the front, is the boxed rectangular cachet. The 12 as. stamp is cancelled with a HYDERABAD RESIDENCY, 4 JUN, 1948, 6.15 A.M. postal cancellation. The cover was under stamped by 2 as., and has been taxed. There is an T29C endorsement on the front of the cover.
Air Mail cover franked 24as (2 x 12as Air-India International commemorative stamps) and mailed from Muzaffarpur, U.P. addressed to Havana, Cuba. The stamps received the boxed first flight cachet in Bombay, and on the verso is the round HAVANA, CUBA, 15 JUN 1948 arrival mark.
Air mail cover sent on Air-India International First Flight on 8th June 1948 from Pandur, South India to San Francisco, USA. Cover is correctly franked with 18as postal stamp and bearing a type C cachet and have Bombay cancellation mark - BOMBAY G.P.O./8.JUN.48.
Air-India International souvenir 12as stamp have Broken Tail Error.
Return to Aerophilately Home Page
Important Copyright Notice: The information and images contained in this web-site cannot be copied or used for any purpose without permission. Copyright of some items listed here belong to other respective owners, and some belong to us, while some are from the public domain. Hence, in order to avoid future complications, please contact us for any such requirement, by clicking this link, and we will respond appropriately. Any violation of this policy, may lead to prosecution of a Civil or Criminal nature, or both, solely at the infringers risk and cost.