35-20
1935 Bombay - Calcutta demonstration flight.
On 25 February 1935, a demonstration flight between Bombay and Calcutta was made by Tata Sons Ltd. The outward flight was via Nagpur and Tatanagar, though the return was by Raipur and Nagpur. The first flight was piloted by the Head of Tata’s Aviation Department, Nevill Vintcent.  Tata issued commemorative covers showing the aeroplane as an Airspeed Envoy, but Rudolph Pinto reports that it was a De Havilland DH83 Fox Moth VT-ADZ.
Director-General's and Postal Notices for this flight
​ 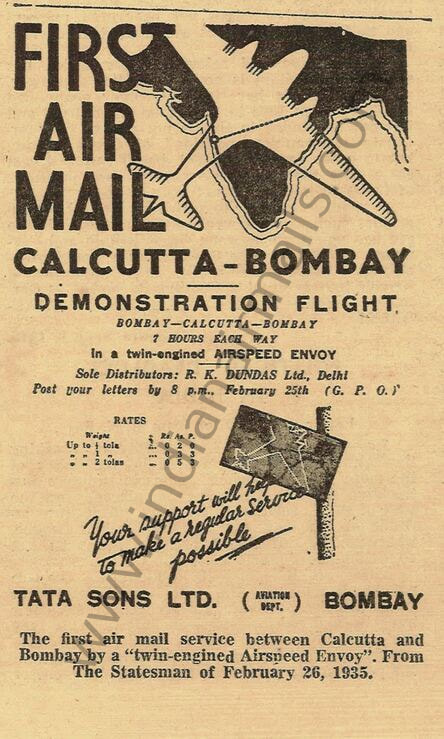 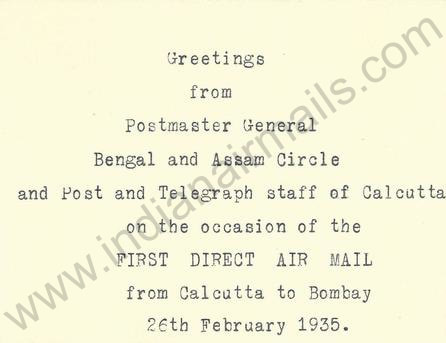 35-25: First Flight cover flown from Calcutta to Bombay addressed to G.V. Bewoor, Director- General of Post & Telegraphs with a greetings message from the PMG, Bengal & Assam Circle.
W 2-2, Raipur - Nagpur
ISC 35-25: Raipur to Nagpur, red/white/blue First Light Britannia with Union jack shield cover franked 3a 3ps, tied by rectangular BUY POST OFFICE CASH CERTIFICATES/26 Feb 35/RAIPUR' advert as canceller. pink boxed "Demonstration Flight/First Direct/Airmail/Calcutta-Bombay/26th February 1935' cachet. Rare stage.
W 2-3, Raipur - Bombay
35-25: Cover flown from Raipur to Bombay. Commemorative cachet 26th February 1935 on the front.
W 3-3, Nagpur - Bombay
35-25: Cover flown from Nagpur to Bombay. Commemorative cachet 26th February 1935 on the front.
Important Copyright Notice: The information and images contained in this web-site cannot be copied or used for any purpose without permission. Copyright of some items listed here belong to other respective owners, and some belong to us, while some are from the public domain. Hence, in order to avoid future complications, please contact us for any such requirement, by clicking this link, and we will respond appropriately. Any violation of this policy, may lead to prosecution of a Civil or Criminal nature, or both, solely at the infringers risk and cost.