Reverse Cancellations
Intermediate cancellations Frankfurt (Main) 14.5.36.
Arrival date stamp Bombay 19 May 36.
Airship 'Hidenberg' LZ 129
Flown Lakahurst to Frankfurt/M
Cover Flown from New York to Bombay
21 - 23 May 1936
From Lakehurst to Frankfurt (Main) by Airship Hindenberg.
Flight 15, 21-23 May 1936.
Then from Frankfurt to London.
Then from London to Karachi by Imperial Airways.
​Finally from Karachi to Bombay by Tata Sons Ltd.

In 1937 by airmail round the world? This was not yet possible due to a small gap in the world wide airmail network. Imperial Airways (IA) was flying from Europe via the Middle East to Hong Kong while Pan American Airways (PAA) was flying from San Francisco via Hawaii only as far as Manila, Philippine Islands. However, there wasn’t any airmail service existing between Manila and Hong Kong, thus the mail between Manila and Hong Kong was sent by surface transportation.
​
Until April 1937, airmail from the US to India was routed only via Europe with airmail service from Amsterdam to India. This service was subject to an airmail fee of 22 Cents per half ounce. If additional trans-Atlantic airmail service by airship LZ-129 Hindenburg was requested, an extra 40 Cents were due making it a total of 62 Cents.

On March 10, 1937, the US Postal Service announced a 70 Cents airmail rate per half ounce for US airmail to be flown by PAA via the Pacific to Hong Kong and onward by IA service to India. The first flight carrying such mail was the April 21, 1937 Clipper departure from San Francisco which was also the first scheduled extended Clipper flight to Hong Kong.

The sender of the cover paid the 70 Cents rate and addressed the cover first to Bombay. The cover was dispatched in New Jersey on April 17 and was flown by United Air Lines trans-continental to San Francisco. On April 21 the cover received a San Francisco transit postmark, this marks the Clipper departure. The cover flew via Hawaii, Midway, Wake, Guam, Manila and Macau to Hong Kong to arrive there on April 28 with corresponding Victoria/HKG transit postmark. The cover also received the blue first flight cachet on which later the India postage was placed.
Two days later, on April 30, IA feeder service left Hong Kong for Penang and arrived there on May 1. On May 2, IA’s Australia service (IW 544) coming from Australia arrived at Penang, the cover was loaded and the flight continued westwards.
On May 3, IA reached Calcutta, the first port of call in India - all mail to India was offloaded. Scheduled arrival was 3.45 p.m., the cover has a 5.30 p.m. Calcutta transit postmark. From Calcutta the cover was probably sent by surface transportation to the addressee at Bombay, arrival there was on May 5 at 11 a.m. according to the arrival postmark.

The addressee at Bombay resent the cover, adding India postage of Nine and a Half Anna, and the cover has a dispatch postmark from Thursday May 6, 1937 at 3 p.m. On Friday May 7 at 9.15 a.m., Tata Airlines flight left Bombay for Karachi, scheduled arrival was at 6.30 p.m. same day. The next morning, the IA flight IW 545 left Karachi. This was again an IA flight from Australia to Europe. IA arrived at Brindisi, Italy on May 11 at 4.09 p.m. According to actual flight reports, this flight was on time.

The cover is addressed to airship captain Max Pruss at the airship at Frankfurt. He should dispatch the cover for the 3rd time, this was for the Hindenburg zeppelin flight from Frankfurt to the US. The 2nd North America Flight 1937 was previously scheduled for May 11, so the cover would have been two days to late to make the flight.

However, on May 4 it was announced that the 2nd North America Flight would be postponed by two days with a new departure date on May 13. The reason for postponing was the coronation of King George VI and Queen Elizabeth at Westminster Abbey at London on May 12. The airship should fly to the US latest film rolls from the coronation for US newsreels.

With the new departure set for May 13 at 8 p.m., the cover from India would have been in time to make the zeppelin connection at Frankfurt. But this is all history, because…. during the 1st North America Flight 1937, on May 6 the airship crashed at Lakehurst and all further zeppelin flights were suspended.
​
This had also an impact on the cover from India. After early morning arrival at Frankfurt, the post office at first had no idea to whom to deliver the cover. There was no longer an airship Hindenburg any more. However, the May 13, 3-4 p.m. Frankfurt arrival postmark is indicating a small delay from the early morning train arrival to afternoon delivery.

And DZR was forwarding the cover to the home of the personal addressee, this was airship captain Max Pruss, who was residing at Frankfurt.
The last postmark on the cover is from November 6, 1937, this is the Red Bank, NJ arrival postmark from the sender who is also the final addressee. And this is almost half a year after the cover arrived at Frankfurt. But why was the cover held at Frankfurt for almost half a year?
The addressee at Frankfurt was airship captain Max Pruss, he was commander on the 1st North America Flight of the Hindenburg. This was the first time he was commanding a North America flight. He was actually flying the airship when it crashed at Lakehurst. Pruss was severely injured and was transferred to the special burns center of the Columbia Prebyterian Hospital in New York and stayed in hospital for the next four months.

Pruss was never questioned and never testified before the US Commerce Department's Board of Inquiry hearings. He returned back to Germany for the first time after the crash in October 1937. He was the last victim of the crash to return back home. Dr. Eckener, president of the Zeppelin company, indirectly blamed Pruss for the crash, and in his opinion Pruss oversteered the airship.

After his return to Germany in October 1937, Pruss finally forwarded the cover in late October to the US, to the sender. Since no airship was flying any more, the cover was sent by surface transportation. Pruss’ injuries and his long treatment in hospital were the reasons why the last leg took almost six months.

Description kindly provided by Mr. Diter Leder, who sold me this cover, with some inputs from me on the IA flights


Click here to know more
First Flight from Manila to Hong Kong on Pan Am route FAM 14
Cover flown from New York to Bombay
Cover mailed in New York and franked 85 cents, addressed to Bombay with the FAM No. 14 FIRST FLIGHT FROM SAN FRANCISCO TO HONG KONG cachet, and then via Imperial Airways to Karachi, and Tata Air Lines to Bombay. 18 postal marks on the reverse.
Cover prepared for the LZ-129 Zeppelin ‘Hindenburg”
Flight from Lakehurst to Friedrichshaffen (Planned Flight on 7 May 1937)
Front piece of a Cover franked with U.S. 30c + 2x50c Airmail postage stamps (total $1.30), and cancelled CITY HALL, NEW YORK, MAY 6, 1936, 4.30 PM. The Hindenburg was destroyed by fire during the landing manoeuvre of the incoming flight on 7 May, marking the end of the Zeppelin service. This cover was then withdrawn by the sender as is evidenced by the black hand stamp WITHDRAWN FROM NEW YORK POST OFFICE (FOREIGN SECTION) BY REQUEST OF WRITER, and initialled and dated 5/7/37 (May 5, 1937). The cover seems to have been resubmitted to the postal department with a new endorsement AIR MAIL IN EUROPE & INDIA.

The addressee SHOW TRUST, BOMBAY, INDIA sounds rather unreal, so I did some research. It seems that a Show Trust Pvt. Ltd., was actually registered as a Non-Government Company on 30 January 1945 with it’s current office address at 22, Merabeth Road, Bombay-1. It is possible that an earlier form of this entity is the name referred to in the cover in question.
Zeppelin Airship, LZ-129 Graf Zeppelin
Memorial Card
Provenance: The Lady Ezra Collection
Romano Auction 1 December 2016, Lot# 1002 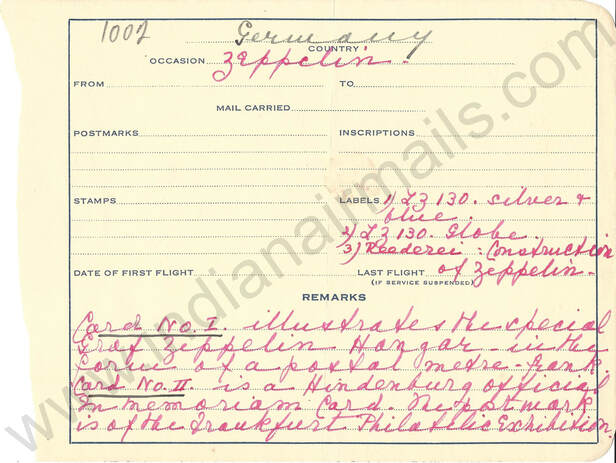 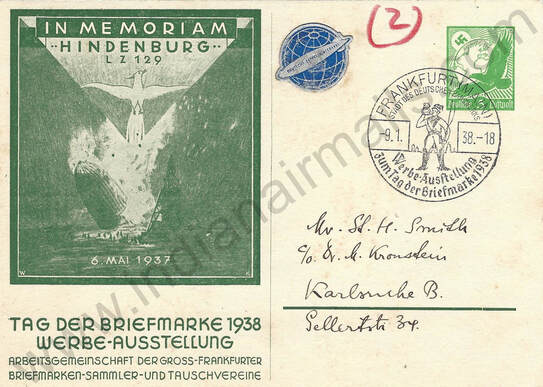 Card in MEMORIAM of the Airship HINDENBERG LZ-129. Issued by the 1938 stamp exhibition, organised by the working group of the Frankfurt-Main Stamp collecting and exchange clubs. 0.05 RM stamp tied with special cancellation mark, and dated 9.1.38. addressed to Stephen H. Smith, c/o Dr. M Kronstein, Germany, and on the front is a small round blue DEUTSCHE ZEPPELIN REEDEREI sticker.
Return to Zeppelin Home Page
Important Copyright Notice: The information and images contained in this web-site cannot be copied or used for any purpose without permission. Copyright of some items listed here belong to other respective owners, and some belong to us, while some are from the public domain. Hence, in order to avoid future complications, please contact us for any such requirement, by clicking this link, and we will respond appropriately. Any violation of this policy, may lead to prosecution of a Civil or Criminal nature, or both, solely at the infringers risk and cost.