37-50
1937 Delhi - Bombay via Gwalior, Bhopal & Indore
As part of its programme for a network of civil air routes in India, Tata introduced a direct mail from Bombay to Delhi via Indore, Bhopal and Gwalior. The aeroplane used on the first flight was a Waco YQC-6 biplane VT-AIX, piloted by J R D Tata and Nevill Vincent.
This service was made possible by the support of the three Indian states of Gwalior, Bhopal and Indore who paid subsidies and provided aerodrome facilities.
The cachet above was used as a canceller at Bhopal only. At Lashkar in Gwalior, a violet four line boxed cachet FIRST FLIGHT / DELHI-BOMBAY / 8th NOV.1937 / LASHKAR, GPO was applied as a canceller, with a similar cachet dated 10th NOV.1937 applied on the return flight.  An official exception to the rule banning the use of Convention States stamps on airmail letters was made on this flight. Gwalior stamps were affixed to 11 letters to Bombay and 23 to Delhi, all receiving the Lashkar cachet as canceller.

Anstee states that a very few covers were signed by the pilots, Mr Nevill Vintcent, Mr N S Seayl and FLt H S Mayes.  However, both Stroud and the Air-India website state that the first flight were piloted by Nevill Vintcent and J R D Tata.
Director-General's and Postal Notices for this flight
​ 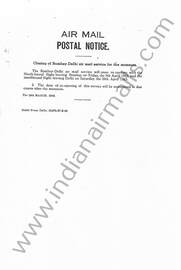